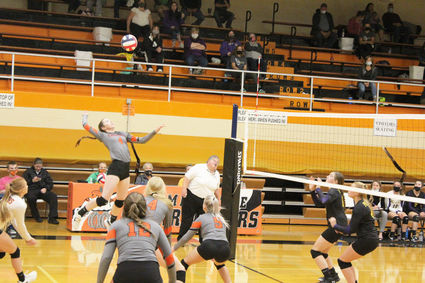 Sophomore Bree Swanson has been very productive for the Sugarbeeters this season. Swanson and her Sugarbeeter teammates are winding down the regular season and will take the No. 2 Seed into the District 7C Tournament October 29-31.

The Chinook High School Volleyball team was back on the court this past Saturday as they had only one scheduled match. Their opponent, the rival Fort Benton Longhorns.

The Sugarbeeters have had their way with the bulk of the District 7C this fall, but their lone loss on the season came in Fort Benton. At home Saturday they were looking to turn the tables. The second time around however the 'Beeters again came up short, losing to the Longhorns in straight sets 25-20, 25-16, 25-23.

The Sugarbeeters are very sound and disciplined defensively and have been effective with their attack in their wins as they have shown throughout the season. The Longhorns have had their number thus far and Chinook has never really been able to muster any momentum in the first couple of matches.

Saturday the 'Beeters played in front of the home town crowd for the final time this season. The girls play hard all the time and head coach Paula Molyneaux has them well prepared.

In the opening set The Sugarbeeters kept pace for much of the way but in the end the Longhorns had the momentum, winning the first set 25-20.

Set number two had the 'Beeters on the ropes early and they were never able to recover, falling 25-16.

With their backs against the wall, Chinook tried to rally and kept pace with the Longhorns from the first serve. Fort Benton had the last hand, earning the sweep with a narrow 25-23 third set win.

The 'Beeter attack was led in the match by the efforts of senior Jayden Miller and senior Delaney Kellam who each recorded eight kills.

Chinook was again efficient from the serving ling with nine Aces as a team in the contest. Senior Ginger Hauer recorded three of them.

Hauer also led the team in Assists with 19 of the 'Beeters 25. Sophomore Bree Swanson logged three blocks on the night while senior Lily Surber dug up 10 balls for the 'Beeter defense.

Chinook will be on the road Friday, October 23 when they travel to Geraldine to take on the Rivals. Their final scheduled contest of the years was supposed to be at home Saturday, October 24, against the Box Elder Bears but that contest has been canceled due to Covid-19 restrictions.

Chinook will then prepare for the District 7C Tournament October 29-31. Due to COVID-19 organizers have been working tirelessly to come up with a format to complete a full post season schedule.