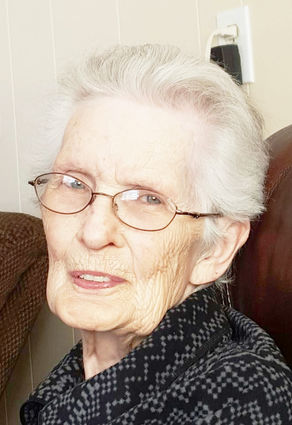 Maxine Evelyn (Sand) Dronen, 94, passed away from natural causes on October 26, 2020, surrounded by family at her home in Chinook, Montana.

Services will be held at a later date.

Max was born August 20, 1926 to Harold Olafson Sand and Florence Mae (Estby) Sand in Chinook. She was greeted by one sister and three brothers, and were later joined by another sister and brother. She grew up in the "north country", north of Chinook known as Elloam, and attended the Hiebert and Ripley country schools through the eighth grade. She lived in town with her sister, Gerry, while she attended Chinook High School. She graduated in 1944 and started her career at the Blaine County Courthouse, working in the Clerk & Recorder, Treasurer and County Superintendent of Schools offices, for a total of 33 years. On April 14, 1947, Maxine and Arthur M. Dronen were married, attended by Geraldine Sand and George Swenson. Max & Art's family expanded in 1948 when Debra Le was born, then again in 1951 with the birth of Anna May. This union continued for 49 years until Art's death in 1996.

Maxine was very active in the American Lutheran Church, the American Lutheran Women, taught Sunday School for years and always helped with bazaars and other functions, continuing to support her church throughout her life. She was also active in VFW Auxiliary, Eastern Star, was an Honorary member of Delta Kappa Gamma, served as an election judge, bowled in league, and published the Weekly Bulletin (legal filings) for over forty years.

Family was most important to Grandma Max. She always had a bottomless container of home-baked cookies, loved to eat her pumpkin pie a tiny sliver at a time, would never pass up lefse making, taught her grandkids how to crochet and play solitaire, was always ready to put a puzzle together, color, or play a game of cards on her kitchen counter, and loved watching episodes of Full House, with or without grandkids. She kept her nails beautiful and had amazing natural curl in her hair. Grandma often talked of her childhood horse, Prince, along with many escapades involving her siblings and parents. She missed them all so much.

Preceding her in death was her husband Art, son-in-law Earl Furlong, granddaughter Kassey Furlong, her parents, two sisters and four brothers, and many dear friends.

Memorials are suggested to American Lutheran Church in Chinook, or Chinook Fire Department.