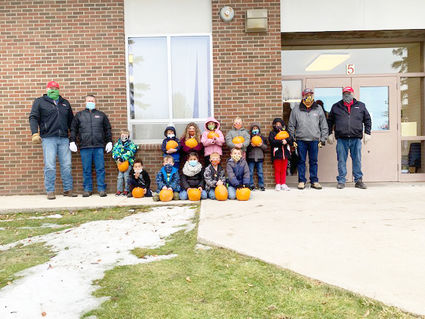 Meadowlark Elementary School had reasons to celebrate at the end of October when representatives from Torgerson's delivered pumpkins to the school for the first graders.

Regarding the pumpkins, first grade teacher Tammy Edwards reported that the gift took her by surprise. "I actually was not notified about them until they were outside ready to give them to us," she said.

Over the years, Edwards has incorporated the pumpkins in art, math, and science lessons. However, this year the pumpkins arrived on October 28, the day before the class Halloween party.

"I didn't want to paint them because they would have to dry overnight and the kids would have too much to carry with their costumes and treats the next day. So, I decided to have them vote on the various face parts for a class pumpkin. I carved the extra pumpkin as they voted for the facial features. Each kid got to remove some of the guts first because what kid doesn't like the slimy feel of pumpkin guts!? We put a light in the pumpkin and enjoyed its glow as we made a paper jack-o'-lantern. Then, I sent the pumpkins home to do whatever their families chose," Edwards said.

According to Torgerson's Branch Administrator in Havre, Sherry Brewster the pumpkin give-away is a tradition with Torgerson's Agriculture Equipment, whose personnel have distributed 27,000 pumpkins to children since 2004.

"It all began sixteen years ago when seven pumpkins were given to a pre-school class of seven students. The following year it grew to seventeen students and seventeen pumpkins and just kept growing," Brewster shared. "We enjoy seeing the smiles on the children's faces."

Torgerson's has ten locations throughout Montana.