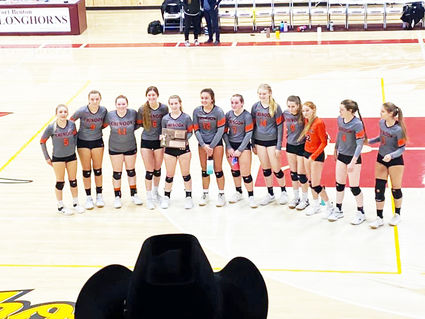 The Chinook Sugarbeeter Volleyball team concluded a spectacular season with a third place finish at the Northern C Volleyball Tournament in Fort Benton this past weekend.

The Chinook Sugarbeeters entered the Northern C Divisional on a high note after finishing second at the District 7C Tournament. They left the Northern C Divisional with a fantastic season behind them. The 'Beeters played hard throughout the tournament and finished third after falling to the Simms Tigers in a grueling five set match Saturday night, 18-25, 25-23, 18-25, 25-22, 25-6.

The 'Beeters then dropped a tough match to the undefeated Fort Benton Longhorns in Friday nights championship match. The 'Beeters took a set from the longhorns for the first time in four matches this season, falling 25-20, 23-25, 25-20, 25-23.

The 'Beeters began the tournament in Fort Benton Wednesday evening in the final match of the day against the 6C No. 3 seeded Belt Huskies.

Chinook then took on the top seed out of the District 6C, the August Elk, and again turned in a stellar performance. The 'Beeters cruised to a 3-1 win to advance to the Championship match Friday night. Kellam slammed home 11 Kills, Bell served five Aces and dug up 18 balls. Senior Crystal Hofer and Hauer each tallied 15 Assists in the win. Sophomore Bree Swanson recorded a team high four blocks for the 'Beeters.

The Longhorns have been the 'Beeters nemesis all season long and while the 'Beeters were able to win a set Friday night it was Fort Benton that earned a 3-1 win. Kellam scored 14 Kills and recorded six Blocks against the Longhorns. Senior Lily Surber added three Aces, Miller dug up 18 balls and Hauer set the hitters up with 21 Assists.

With a trip to the Class C State Tournament on the line, the 'Beeters were looking to get off to a fast start. Senior Hailey Bell pounded home a point and senior Lily Surber served an Ace to give Chinook a 5-3 lead in the opening set. Sophomore Bree Swanson later slammed home a nice Kill to give the 'Beeters a 19-9 lead. Chinook went on to win the opener 25-18.

The Tigers were up for the challenge in set number two as the teams went back and fourth. The Tigers claimed a 11-7 lead early on but the 'Beeters responded with a Kill from senior Delaney Kellam and a pair of Aces from senior Jayden Miller to even the set at 11-11.

Following a Simms timeout it was the Tigers that got hot, jumping out to a 16-12 lead before the 'Beeters again made a run. Swanson scored twice at the net and Kellam came up with a big hit of her own to bring the 'beeters within one, 23-24, before the Tigers scored the final point.

With the match even at a set apiece and the third set tied 6-6 the 'Beeters forced several Tiger miscues in taking a 10-6 lead. Swanson came up with a big block in the middle to give Chinook a 15-9 advantage. Hauer then served up a pair of Aces and Chinook was in control with a 17-9 advantage. They went on to win the third set 25-18. 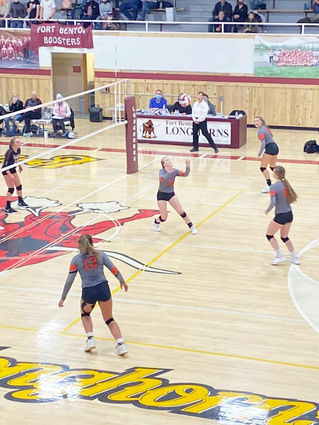 'Beeter senior Ginger Hauer looks to start the 'Beeter attack with a nice set in their match against Belt Wednesday night.

Looking to close out the Tigers in set number four it was Simms that jumped to an early 7-3 lead. Like they have done all season the 'Beeters responded. Freshman Hallie Neibauer recorded a huge block at the net, Bell served up an Ace, Miller slammed home a pair of Kills and suddenly Chinook was back on top 14-10.

Chinook held a 21-18 lead late in the fourth set following a Bell Kill but the Tigers caught fire and turned back the 'Beeters with a 25-22 win to even the match 2-2.

In the fifth set, Chinook was never able to gain any traction or mount any comeback in a 15-6 loss that ended the match with a Simms win.

Bell led the attack with 11 Kills while also digging up a team high 15 balls. Hauer set the hitters up with 22 Assists and recorded four Aces on the night. Kellam protected the net with 12 blocks in the season finale.