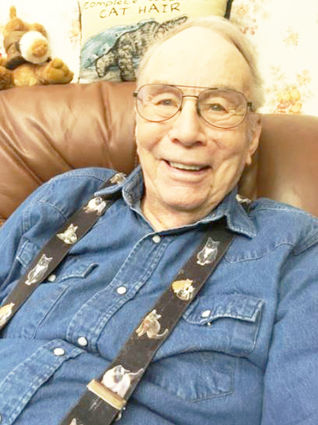 Harlan Krass of Hogeland passed away November 3, 2020, at the Sweet Nursing Home in Chinook of complications of Covid.

Harlan L Krass was born in St. Paul, Minnesota on January 22, 1929. He was the only child born to Lewis and Hilda (Agrelius) Krass.

Harlan started school in the third grade at the age of six at the Wing School southwest of his home. He attended Hogeland High School and graduated in 1945 at age 16. He graduated from Northern Montana College and graduated with an Agricultural degree in 1947. He furthered his education by attending Montana State-Bozeman pursuing a degree in engineering.

He joined his father in farming until he was drafted in 1955 into the U.S. Army where he was stationed in Camp Zama, Japan as a clerk typist. He had an honorable discharge in June of 1956, and returned to the family farm.

After his return from serving his country, he continued dating a neighbor girl, Jane Rafter. They dated until marriage on September 15, 1957. To this union 6 children were born. Linda, Cynthia, Diana, Lorin, Anita, and Hilary.

Harlan's civic organizations that he belonged to were Toastmasters and Hogeland American Lutheran Church, of which he was the President of when the Church celebrated its 25th anniversary.

Harlan was a man of many talents and he tried many professions during his life. He was a licensed private pilot and even did some crop dusting. His latest plane, a twin engine Skymaster was his dream come true. He made many trips between home and his job sites over the years.

Many young people held their first employment with Harlan. He was a patient man and enjoyed teaching his skills to others.

Harlan and Jane were the first "All Electric" farm on the Big Flat. They started up an egg production business, Krass Kackleberries, and sold eggs from Great Falls to Glasgow for several years. At that time, a cattle feedlot was also started. Due to rising costs of feed, he decided to try his hand at excavation and concrete work. He did this for a number of years, making his own concrete feed bunk design. He also dug and formed many basements in the area. He also constructed many grain bins and buildings over the years.

Harlan was the first on the Big Flat to have center pivot irrigation. He was sold on the idea, so he started drilling wells. He had a real passion for drilling and it led him to many parts of the country drilling; including Oroville and Blythe, California, Thompson Falls, Montana, and lastly, Tucson, Arizona. He retired back home on the family farm in 2009 after surviving a hemorrhagic brain bleed and a hip replacement. He loved being back with his family, but it was obvious even later when Dementia struck him, he still wanted to work and that's where his heart was. He loved his family, his faith, and his beloved feline friend "Blackie."

Memorials may be made to Hogeland or Turner Lutheran Church, Turner Park, or Blaine County II Ambulance.

To send flowers to the family or plant a tree in memory of Harlan Lester Krass, please visit our floral store.