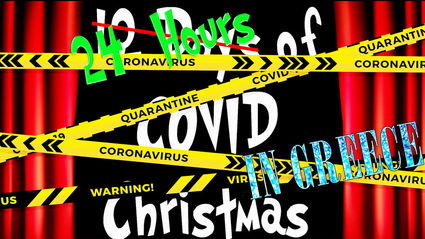 On Saturday, December 19, the Montana Actors' Theater (MAT) showcased a free live stream of their 24-Hour Play Festival as a holiday gift to the community. The main show, A Covid Christmas in Greece began at 7:00 p.m., but the organization had content streaming off and on throughout the day on their website as well as on Facebook.

"Our play festival had a few twists this season," MAT's Executive Director, Jay Pyette said. "First, we couldn't hold the festival in November; second, a live audience was not permitted, and third, we weren't taking the Mamma Mia set down, so we decided the show would simply have to take place in Greece, over the internet, and just in time for Christmas!"

MAT put a call out a few weeks ago looking for participants and assembled four groups based on those who answered the call. Because of COVID restrictions, the typical practice of choosing random teams could not happen this year. Two people with Blaine County ties, Pyette and Anjanett Hawk performed as a writer and as a director, respectively.

"Instead of the random draw, we placed people on teams to minimize contact. That took away a social portion of the event, but it was a necessary step in order for the show to go on," Pyette explained.

Grant Olson, who serves as the Artistic Director for MAT, explained that the teams were formed to keep family members, personal associations, and social circles together so as to keep everyone safe. "We also had to put a cap on numbers since the stage area can only accommodate so many, and we had to adhere to health restrictions," Olson said.

Olson went on to say that the 24-Hour Play Festival provided a means for MAT to practice their craft in these times of isolation and limitation. "Not creating was eating our souls; we needed a performance."

Each team learned of its membership of actors, a writer, and a director on Friday night, December 18, at 7:00. A headline was then randomly drawn from a collection of newspapers, and the writing began from there.

Writers had until 7:00 Saturday morning to write a script centering on the headline and utilizing the actors they had been assigned. Directors arrived at 8:00, and actors trickled in by nine. "That was as early as I dared to ask the actors to be in attendance; typically an actor doesn't show up on a set until ten o'clock or later," Olson chuckled.

Once written, choreographed, and blocked, each play ran for approximately 20 minutes. The four shows were livestreamed on the MAT website. "With the quality of streaming equipment, we were able to give everyone a safe and superior performance. From the technical side, the sound and video were quite impressive," Olson reported.

Anyone who did not get to see the live stream can still view the four plays, which have been uploaded to Facebook and are also housed on MAT's website, mtactors.com. This was the fourth year that MAT hosted the event.