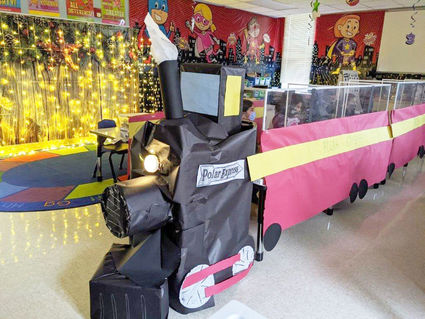 There's no denying that 2020 has been a roller-coaster year, but COVID-19 couldn't put a stop to the spirit of Christmas at Harlem Elementary School!

Throughout the month of December, everyone could feel the excitement building, and any visitors granted access to the building would have seen halls lined with Christmas lights, ceilings draped in paper chains, and classrooms embellished with trees and other décor. Whimsical holiday animals, cozy chimneys complete with stockings, figures of Santa, and the occasional Grinch also appeared. Sometime during a particularly snowy night, the Polar Express parked in Mrs. Hopkins' classroom, enticing anxious first graders to await Santa's arrival.

As hybrid groups A and B took turns participating in ugly sweater day and pajama day, the students continued to practice for their virtual music concerts. The Hybrid B student group's Virtual Christmas Concert took place on December 17 and that for the Hybrid A student group on December 21. Under the direction of Elementary Music Instructor Lynda Brown, the concert opened each day with the Kindergarteners singing "Jingle Bells" and "We Wish You a Merry Christmas." They played the bells to accompany each song.

That performance was followed by the first graders singing "Santa Claus Is Coming to Town" and "Jolly Old Saint Nicholas." The second grade performed "Up on the Housetop," complete with choreographed gestures, and sang

"All I Want for Christmas Is My Two Front Teeth," and the third grade played the bells to "O, Holy Night" and "Jingle Bells."

In the second half of the musical presentation, the fourth grade performed "Here Comes Santa Claus" and "Frosty the Snowman." Following them, the fifth graders sang "Winter Wonderland" and "I'm Gettin' Nuttin' for Christmas."

The concert concluded with a sixth grade rendition of "Holly Jolly Christmas" and "I Want a Hippopotamus for Christmas."

Although no visitors or spectators were allowed in the building for the concerts, the musical performances were livestreamed on the Harlem Public School's Facebook page so that parents and other community members could watch, listen, and enjoy.

During December, Santa Claus visited the students three times. According to a spokesperson from the school, his first appearance was accompanied by a commotion in the hall while the students were diligently doing their work. As they looked up from their desks, there appeared in the doorway a giant gingerbread man and a jolly Christmas tree, beckoning the students to follow them. Down the halls and to the gym they were led, where gigantic stockings and Toys for Tots gifts were waiting.

As part of the Virtual Christmas Concert presented via Harlem Public Schools Facebook page, the second graders perform "Up on the Housetop."

Following the Virtual Christmas Concert, Santa flew down from the North Pole and made his way to the Polar Express train. He brought a shiny reindeer bell for each true believer. Janice Gilham, a Computer Technology Assistant at the school, reported that the bells were "frozen from the trip through the Arctic air."

A final appearance from Santa Claus delighted the students on December 22 when "he" gave them a special holiday send off as "he" waved at the buses and wished everyone a fantastic Christmas vacation! The holiday break for Harlem Public Schools will run from December 23 through January 1, with school resuming on January 4.

"So you see, not masks, not face shields, not social distancing, nor COVID-19 itself could destroy the Christmas spirit at Harlem Elementary," Gilham said.

She concluded by sharing these greetings: "May the happiness, glad tidings, and love of this special season spread from our hearts to yours. Merry Christmas and Happy New Year from everyone at Harlem Elementary!"