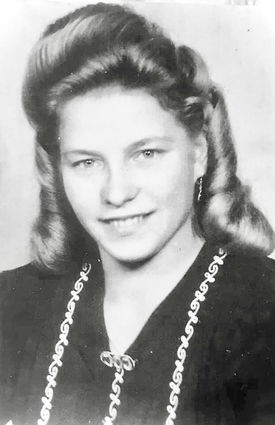 Anna Haluszka, longtime resident of Harlem, Montana, passed away from COVID-19 while living in a care center for Alzheimer's patients in Houston, Texas, on Sunday, December 13, 2020. Funeral services will be held Wednesday, March 17, 2021, 2 PM at St. Thomas Church in Harlem. Wilderness Funeral Home of Chinook is in charge of the arrangements.

Born on June 28, 1927 in the Ukraine, Anna was a woman of resilience, determination, and unwavering faith. This prayerful woman was beautiful both inside and out. Anna had a wonderful childhood, loved by her parents and raised amongst a large family. She would often share memories of growing up in a small village with Ukrainian family traditions. There were fruit trees in their back yard where her grandparents lived nearby. At the tender age of 14, her life suddenly changed as she was taken from her family by the German Nazis during World War II. Anna never saw her birth family again. She suffered for years not knowing if any of her family or village friends survived the war. It would be many years after she moved to the USA before she had contact with family from the Ukraine. Finally, a letter arrived with information about her loved ones. There would be an occasional exchange of letters and cards through the years, but sometimes it would be multiple years before she heard from her family in the old country. She was met with unbelievable hardships through this most difficult time. While Anna was in a displaced persons work camp she met the love of her life, Ivan Haluszka. In a borrowed wedding dress shared by all the women who were married while living in that camp, Anna and Ivan were married on February 15, 1947. In 1949, while still in the work camp and now with their one-year-old daughter, Maria, they were thrilled to receive sponsorship to come to America. They traveled via ship, docking in Boston Harbor. They boarded a railroad train leading them to Harlem, Montana, where they built their home, family, and business. Ivan and Anna worked diligently to learn the American way; not knowing how to read, write, or speak English, they studied hard and became United States citizens. Anna was grateful to be living in the land of the free with endless opportunities.

Anna was most content as a devoted wife and mother. She gave birth to five children, Maria (Marusha), Pete, JoAnn (JoAnne), Johnie Michael (who died at birth), and Paul. She was a faith-filled and God-fearing woman. To supplement the needs of their growing family, Anna took on ironing for others and babysat in her home. She enjoyed baking-especially the beautiful Ukrainian specialty breads at Easter and the braided breads at Christmas. She also enjoyed cooking traditional dishes such as pierogies, pigs in the blanket, hot potato salad, homemade sauerkraut canned from the crock, and borst. Also, she canned everything from their garden and enjoyed sewing, quilting, and embroidery work (Anna was known for her counted cross stitch pillows she made out of gunny sacks without a pattern-she never wasted a thing!). Anna had a green thumb when it came to anything planted in dirt: trees, flowers, vegetables, and indoor plants. Ivan and Anna always had one of the most beautiful and bountiful gardens in the area. Anna knew not a stranger and touched the lives of everyone she met. She was a member of the St. Thomas Catholic Church in Harlem and Altar Society.

Anna enjoyed a very long life. Even with the unspeakable amount of suffering and heartache, she remained thankful for all of her blessings and life in America. 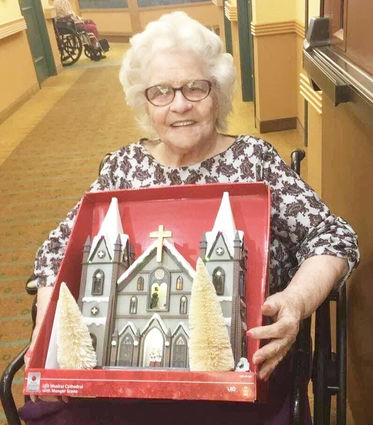 Memorials may be sent to the giver's choice.