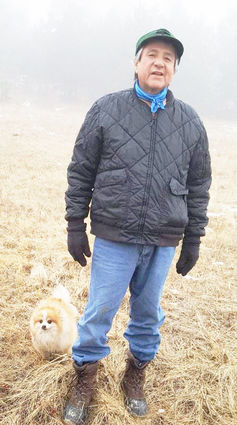 Benjamin Dean Carrywater, began his journey to the big sands on Tuesday May 4th in Fort Belknap, MT. A wake was held at his cabin on Carrywater Mountain at 6:00 pm on Thursday, May 6th, 2021 and Funeral Services at Wilderness Funeral Home in Chinook at 11:00am on Friday, May 7th, 2021. Cremation followed. Ben was born May 22nd, 1962 to Benjamin "Toady" Carrywater and Velmarie Lodge Carrywater. He was raised in Hays attending Hays Schools. After Graduation he joined the United States Army. He was Honorably discharged in September of 1989. Ben was proud of his service to his people and to his country. In 1985 he met Bonnie Mount and of this union two children were born, Lil Ben and Starlynn. They later separated. In 1990 He met Bobby Heppner and of this union a son was born, Matthew.

Ben was an exceptional carpenter. In the early 1990's he built his own cabin near Carrywater Flats. He picked the most beautiful homesite. He was so proud of his home on Carrywater Mountain. Ben enjoyed building any type of structure. He built benches at local baseball fields as a volunteer for the OSAP Program. This brought him much joy.

Ben's passions included playing league basketball, he was known as "Gifted" on the court. He also enjoyed volunteering with area youth. He would give the youth he encountered good advice and the last dollar in his pocket. Ben will forever be remembered for his generosity, compassion and kind heart. At the top of Bens priority list was being there for his family. He loved his children more than life and was always extra proud to talk about his grandchildren. His eyes would light up talking about them or seeing them. Ben cared so much for his entire family. He took being a big brother very seriously. He always made sure his sisters were taken care of. Ben was also known for his tall tales, he can make any story he told seem like you were right there with him,. Anyone who knew him knew his stories of being an outlaw and was very proud to be great, great grandson of Kid Curry.

The love of Ben's life was his dog, Half Pint. He loved Half Pint more than life itself. Half Pint got the royal treatment, from bones bigger than him to Christmas cards. If you saw Ben, Half Pint was trailing behind.