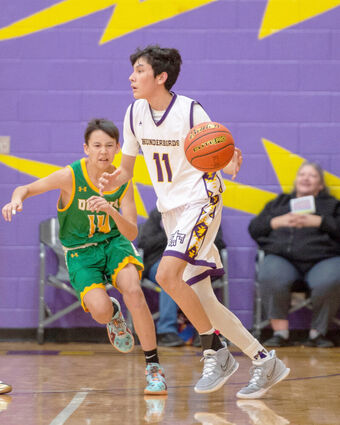 Junior Cash Messerly looks to run the offense against the Coyotes Tuesday night. Messerly scored 10 points in the Thunderbirds 67-55 win over Dodson.

The Hays/Lodge Pole Thunderbirds dropped a hard fought overtime thriller to the Dodson Coyotes to begin the season back in early December. This past Tuesday the Thunderbirds evened the series with an impressive 67-55 win over the visiting Coyotes. Saturday the boys headed west for a showdown with the Box Elder Bears. Box Elder started fast and never looked back handing the Thunderbirds a 110-66 set back.

When the season started the Thunderbirds and Coyotes were the others first opponent. In a back and forth game that could have went either way it was the Coyotes that held on. Tuesday night in the Thunderdome Hays Lodge Pole made sure early on there would not be a repeat.

Junior Cash Messerly and sophomore RJ Blackcrow each connected from downtown and the Thunderbird defense held the Coyotes scoreless during a very strong opening eight minutes for the home team. Hays/Lodge Pole opened up a 15-0 lead to start the contest.

Junior Daniel Henry scored 10 points in the second, including three from beyond the arc to power the Thunderbird attack. Hays/Lodge Pole opened up a 43-23 halftime lead and never looked back. In the end the Thunderbirds evened their season series with the Coyotes following a 67-55 non-conference win.

The Thunderbirds had four players finish in double figures led by senior Brandon Castillo with 11. Henry, Messerly and senior Tyshawn Shambo all finished with 10.

The Thunderbirds were in Box Elder Saturday night looking to challenge the Bears in a District 9C contest. Hays/Lodge Pole couldn't match the Bears attack offensively. The Thunderbirds did their best to stay close but a 25-14 deficit at the end of one ballooned to 44-27 by intermission.

The Bears didn't take their foot off after the break, in fact they stepped on it a little harder. The Thunderbirds allowed 66 second half points to the Bears in a 110-68 conference loss. Shambo led the Thunderbirds with a 33 point outburst. Senior Brandon Castillo finished with 11.