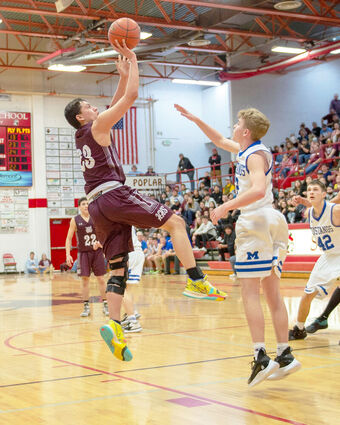 Wildcat senior Tyler Cichosz scores a bucket in the District 1B Championship Saturday night in Glasgow against the Malta Mustangs.

March Madness is right around the corner and soon everyone will be filling out their brackets, but right now, up and down the Hi-line High School District Tournament Basketball reigns supreme. Gyms all across the state, filled to the rim and entertaining tens of thousands of basketball fanatics. Blaine County has proven to be an extremely proud and vocal supporter of our local teams and this past weekend only reinforced that commitment.

The Harlem Wildcats turned a roller coaster, up and down regular season into a District 2B Championship. Harlem whooped the Malta Mustangs Saturday night 71-56 to claim the crown and advance to the Northern B Divisional. The Chinook Sugarbeeters continued their week to week improvement and rallied for a third place finish at the District 9C Tournament in Havre with a thrilling 71-69 win over Box Elder in the consolation final. The result, another trip to the Northern C Divisional this week.

The Hays/Lodge Pole Thunderbirds notched a tournament win but saw their season end this weekend in Havre. Turner never did find the win column against their 9C opponents, but they were fun to watch and enjoyed the support of a very proud Turner following.

The Harlem Wildcats entered the District 2B Tournament as the regular season No. 3 Seed. The Wildcats were a hard team to gage all season long, but always gave fans the sense that anything was possible. Harlem had suffered a pair of losses to the No. 2 Seed Wolf Point Wolves during the regular season and in their first meeting with the No. 1 Seed Malta Mustangs, they were beaten soundly.

As the season wore on, the Wildcats showed flashes of brilliance and an ability to take their game to another level, Harlem concluded the regular season with a convincing lopsided win over the Mustangs and were looking to carry on with that momentum as the post season got underway. In their semifinal game against the Wolf Point Wolves Thursday night they did just that.

Harlem turned a two point 17-15 first quarter lead into a 35-26 halftime advantage, controlling the flow of the game on both ends of the court. The Wildcats ensured victory with a solid second half effort that saw them push their lead to 18, 58-40 at the end of three. The Wildcats then set themselves on cruise control down the stretch, securing a 73-54 win over the Wolves. Senior Tyler Cichosz went 7-8 from the field and scored 19 points to lead the Wildcats.

Saturday the Wildcats found themselves in the District 2B Championship opposite the Malta Mustangs. Right from the opening tip the Wildcats had the Mustangs on the ropes. Harlem turned a 17-8 first quarter lead into a twenty point 38-18 advantage by halftime. There would be no Mustang comeback the second half, as Harlem kept their foot on the accelerator and walked away as District 2B champions following a 71-56 win over the Mustangs.

Sugarbeeters Are Headed Back to the Northern C

The Chinook Sugarbeeters once again are headed back to the Northern C Divisional in Great Falls. The 'Beeters have been regular attendees to the tournament for the past decade and punched their ticket to this years tournament with a thrilling 71-69 win over the Box Elder Bears in the consolation final Friday night. Chinook began the tournament with lopsided 63-33 thumping of the Fort Benton Longhorns Wednesday afternoon. The Sugarbeeters had three players in double figures, led by senior Oskar Pula with 13 points, senior Toby Niederegger contributed 13 as well and senior Braden Eoff finished with 11. Pula also corralled six rebounds and Niederegger dished out six assists.

Thursday night the 'Beeters took on the No. 1 Seed Chester/Joplin-Inverness Hawks and were dealt a tough 60-46 loss after leading 24-21 at the break. Niederegger finished with a team high 17 points, Pula added 15 points and 10 rebounds while Eoff scored 9 and dished out four assists. The loss set up a Friday morning loser out contest with the Hays/Lodge Pole Thunderbirds.

Chinook started fast, building a big early lead, 17-7 early in the second quarter. Pula finished the first half with an impressive slam at the buzzer to give Chinook a 32-18 halftime lead. The Thunderbirds continued to battle back on the second half cutting the 'Beeter lead to single digits late but in the end it was Chinook coming out on top 56-48. Pula recorded another double-double with 19 points and 19 rebounds. Junior Brenden Fetter added 12 points to the 'Beeter effort while Eoff finished with nine points and five assists.

In the consolation final the 'Beeters were looking to turn around two regular season losses to the Box Elder Bears and clinch their spot at the Northern C. The 'Beeters jumped out to a 21-13 lead at the end of one, but like the first two meetings between the teams, no lead was safe for anyone. Box Elder battled back in the second and took a 39-35 lead into halftime. Chinook evened the contest to start the fourth at 54-54. This time it was the 'Beeters that had the last laugh, securing a thrilling 71-69 win over the Bears and extend their season. Niederegger led the way with 25 points while also recording seven steals. Fetter finished with 15 points and Pula added 14 points and 12 rebounds.

The Hays Lodge Pole Thunderbirds concluded the 9C regular season as the No. 7 seed compiling a 3-11 conference mark and an overall record of 5-13. What the record doesn't reflect is many of those losses were just two or three possession outcomes. The Thunderbirds were hoping to flip a couple of those results at the District 9C tournament. In their quarterfinal opener the Thunderbirds could not keep up with the run and gun Big Sandy Pioneers being soundly defeated 90-50. Senior Tyshawn Shambo provided the bulk of the Thunderbird offense with a 17 point 10 rebound effort.

Thursday morning in loser out action against the North Star Knights the Thunderbirds extended their season with a solid effort against the Knights. The Thunderbirds set the pace early on, taking a 19-7 lead after one and extending the margin to 33-17 by halftime. Shambo again shined for the Thunderbirds down the stretch, helping them secure a 57-51 win over the Knights. Shambo finished the contest with 24 points and 15 rebounds. His performance included converting 15 of 16 attempts from the charity stripe.

.Entering the tournament as the eight seed meant drawing the top seed in their first round contest. Chester/Joplin-Inverness established themselves early on and quickly took control of the game. The Hawks defeated the Tornadoes 56-19. Thursday morning the Tornadoes turned in a solid effort against the Fort Benton Longhorns, but fell just short losing 56-48 and ending their season come to an end. Turner was led in the contest by sophomore Ryan Doyle with 22 points. 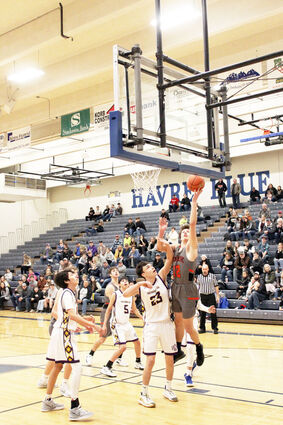 The No. 3 9C Sugarbeeters (13-7) will begin play this Wednesday at the Northern C Divisional against the No. 1 10C Heart Butte Warriors at 5:30 p.m. The Northern C Divisional is being played at the Four Seasons Arena in Great Falls. The top two finishers at the Northern C will move on to the Montana Class C Boys State Basketball Tournament, March 10-12. The State C Boys Basketball Tournament will also be played in Great Falls at the Four Seasons Arena.

The Harlem Wildcats will begin play this Thursday at 1:00 p.m. against the No. 4 2B Conrad Cowboys at Northern B Divisional in Glasgow. The top two teams at the Northern B will advance to the Montana Class B Boys State Basketball Tournament in Bozeman, March 10-12 at the Brick Breedan Fieldhouse on the campus of Montana State University.