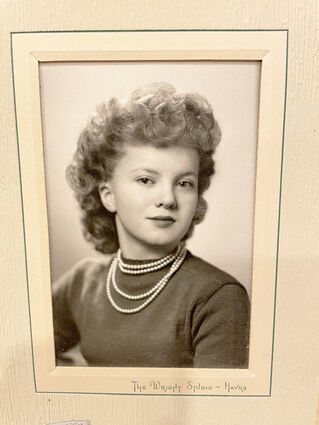 Josie Marion Ness Hart of Auburn, California passed away at John Muir Hospital in Walnut Creek, California on March 26, 2022 following a stroke. She was born on November 8, 1932 in Dodson, Montana and raised by her maternal grandmother and grandfather in the Badlands near Bullwacker Coulee.

Josie, the middle child of three girls, was small for her age, but what she lacked in size she more than made up for with her stubborn and feisty disposition. Early education was spent at country school with her sisters and cousins, taught by their Aunt Zeal.

After graduation from Chinook High School in 1950, Josie went on to become a secretary at the naval shipyard in Bremerton, Washington. After a few years, she moved to Sacramento, California and worked as a stenographer for the Department of Corrections. In February of 1954, Orville J. Hart drove to Sacramento, professed his love to her and married her in Idaho Falls on their way back to live in Montana.

In November of 1954, John S. Hart was born, followed by Joli R. Hart in 1957 thus completing their little family.

Orville and Josie spent many years moving from place to place as Orville advanced in his career with the federal government. They met new friends along the way, but always kept in touch with family and longtime friends, many they had known for over sixty years, no matter where they settled.

Josie spent the last years of her life in California; twenty-five were spent at her daughter and son-in-law's property in Auburn. And the last year and a half at her son and daughter-in-law's home in Pleasant Hill, California in the same house that she and Orville lived in back in the 70's and early 80's

Josie, or Nana as everyone called her, is survived by her two children, John Hart (Sandra) and Joli (Scott) Roberts; her grandchildren Jasmi (Guy) Vackar, Ryan (Stephanie) Hart, Kaeli (Brendan) Hogan, Christopher (Gabby) Hart, Kelden (Emily) Roberts, and Courtney Hart and four great-grandchildren. She is also survived by her sister Mary Swarthout of Olympia, Washington, along with many beloved nieces, nephews, and cousins.

Josie was preceded in death by her loving husband Orville, married for 56 years, and by her older sister Lela Wortman.

In remembrance, of Mom, Nana, Josie, and all the hours she spent on the phone, please call a friend or relative and let them know how much they mean to you. She will be smiling down from the heavens.