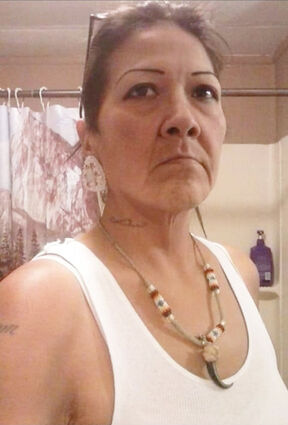 On the 8th day of August, 2022, Christy Lynn Stiffarm left to join the Lord.

As a baby at two weeks old, Chrissy began her life with Barbara Mount Longknife and the late James Francis Stiffarm Jr. She was lovingly greeted by her mom and dad. Chrissy also was adored by her siblings; Carrie, Cheryl, Jeff, and Carol.

To be blessed in her life of having 3 gentlemen she called her dad; James Francis Stiffarm, and Dennis Longknife Sr., both of whom greeted her with open arms, along with her very special nephew Jeffery "Weffy" Stiffarm Jr. Mike Neely, her dad that took over. She is leaving her beautiful Mom and JD for him to take care of.

Chrissy attended and graduated from the Hays Lodgepole Schools. She enjoyed playing basketball and participating in rodeos and she won a saddle when she was 14 years old. She loved to hang out with her friends, new and old. She became an accomplished artist, her beautiful artwork was very captivating. Chrissy attended Haskell Junior College for a short time and also lived in Wyoming, Great Falls, and Havre. Chrissy was never one to let the grass grow under her feet. She loved hanging out with her nieces and nephews and getting crazy with them.

Chrissy touched the lives of so many people, she was a true blessing from God. We will miss her dearly, but we will never forget her.

Chrissy leaves behind relatives from numerous families, Stiffarm, Mount, Johnson, First Raised, and any we haven't mentioned, it was not intentional. As well as numerous aunts, uncles, nieces, nephews, and cousins.