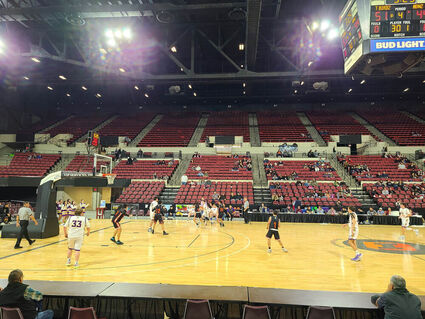 Hays/Lodge Pole senior Daniel Henry uses a screen to attack the Lodge Pole defense during Saturday afternoon action against the Indians in Billings.

The Hays/Lodge Pole Thunderbird boys basketball team kicked the 2022-23 season off this past weekend at the All American Indian Shootout in Billings. The Tournament was held Thursday through Saturday at Rimrock Auto Arena. The boys dropped their opener Thursday afternoon, in a hard fought contest with the Plenty Coup Warriors 64-52. The Thunderbirds returned to the court on Saturday where they got off to a fast start and cruised by the Lodge Grass JV 66-49.

In the season opener the team, many of them seeing their first extended varsity action, experienced some growing pains early on and some missed opportunities down the stretch. Six players found the scoring column early on. Senior Daniel Henry and junior Kaleb Walker and freshman Jesus Aguirre each scored three points while junior Davontae Sullivan, junior William Hughes and sophomore Russell Plainfeather each scored a field goal to help the Thunderbirds take a 15-12 lead heading into the second quarter.

Plenty Coup turned the tables before the half, outscoring Hays/Lodge Pole 17-15, leaving the Thunderbirds with a tenuous 30-29 advantage heading into the break. Henry scored six points in the second including two from distance. Sullivan and Hughes each knocked down three balls of their own to help the team hold the lead.

Henry and sophomore Avery Boe knocked down long balls to keep the Thunderbirds even with the Warriors but in a hard fought back and forth third quarter it was the Warriors that would win the frame 15-14 to even the contest at 44-44 heading into the fourth quarter of action.

Saturday the Thunderbirds were looking to bounce back with a much more spirited effort start to finish. With a game under their belt the Thunderbirds were able to get off to the quick start they had hoped for. Head Coach Derek Shambo had missed the season opener while attending a training conference in Oregon. Shambo made his way from the airport to Metra in the fastest way possible to lead his team in game number two.

Henry powered the Thunderbird offense early on, connecting once from beyond the arc for a nine point first half. Hughes and Walker each added triples of their own in helping the Thunderbirds take a 25-21 lead over Lodge Grass heading into halftime. 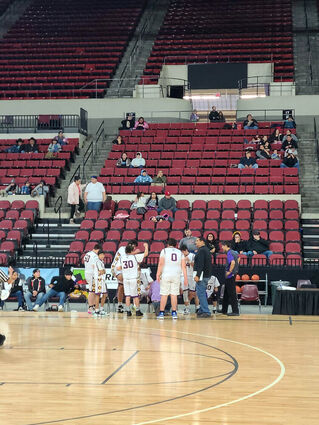 The Thunderbirds celebrated the return of Head Coach Derek Shambo to the bench and rewarded him with a 66-49 win. The Thunderbirds went 1-1 in Billings at the All American Indian Shootout.

The Thunderbirds began to open things up during the third quarter. Henry added another three ball and nine more points to help the Thunderbirds turn a four point advantage into a 39-33 lead heading into the fourth quarter.

Henry connected twice more from distance down the stretch and the offense really began to find its mark. Six different players combined to score 26 fourth quarter points powering the Thunderbirds to a comfortable 66-49 win to even their season record at 1-1. Henry led the Thunderbird attack with 24 points in the contest including four from downtown.

The Thunderbirds were back on the court Tuesday in a contest with the rocky Boy Stars, results will appear in next weeks Journal. Hays/Lodge Pole will open District 9C play this Friday in Gildford against the North Star Knights. They will make their home debut on Saturday in the Thunderdome against the Big Sandy Pioneers.