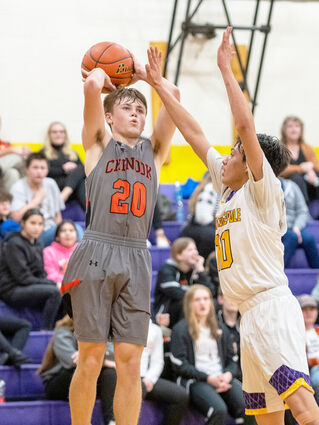 Chinook sophomore Carson Nissen scores a first half bucket Tuesday night in Hays. The 'Beeters defeated the Thunderbirds 55-48 in a District 9C clash.

The Chinook Sugarbeeters were in Hays last Tuesday taking on the Thunderbirds in a rescheduled game from December. The 'Beeters battled their way to a 55-48 win to notch their second conference win of the season. Thursday the 'Beeters fell to the Big Sandy Pioneers at home and were defeated 72-52. Saturday in Box Elder the Bears secured an 82-58 win over the 'Beeters.

Tuesday in Hays both teams had their offense rolling early on. The Thunderbirds connected six times from distance, including three from senior Cash Messerly. The 'Beeters collected nine points from senior Brenden Fetter as fiv...