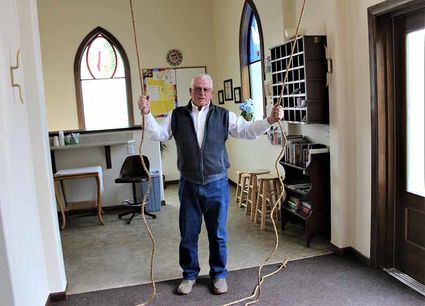 Fred Miller, a member of the Zion Lutheran congregation, explains why two ropes go from the sanctuary entrance to the bell tower above. One rope rings the church bell and the other is for the 'clapper.' The clapper is a hammer-like device that hits the rim of the church bell to make a single 'gong.' Miller said the clapper was damaged a few years ago but plans are to make it operational again.

The first Lutheran service ever held in Chinook occurred in June, 1904 and was held in the Methodist church building. Ten years later the current Zion Lutheran Church building, at the corner of Illinois and 8th Street, was dedicated. Last Saturday Zion congregants and guests celebrated a Service of Thanksgiving for the Finished Revitalization of the church building. The service capped a year-long major renovation involving a new roof, an expanded narthex, a reconfigured access to the basement and shoring up of some parts of the building sagging after a century plus of service. The thanksgiv...