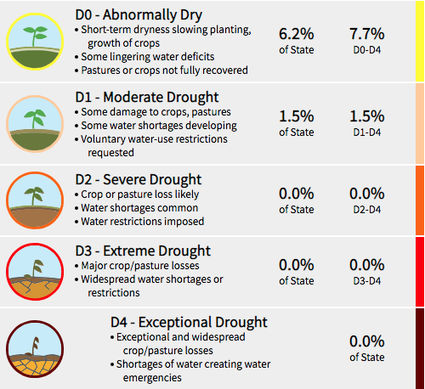 These graphs show a drastic improvement in drought conditions across the state from December of 2017 to November of 2018. Record amounts of snowfall in February across the region greatly helped Blaine County start to recover from D3, Extreme Drought Conditions a year ago to, D0 Abnormally Dry, conditions this November. Currently there are just a few locations in the state with a drought designation of D1 (1.5%) and 6.2%, including Blaine County with D0 status. According to Megan Syner with the National Weather Service, good moisture in May and June will go a long ways towards continually improved drought conditions.

The amount of water available and the fertility of soil has dictated the success of farmers since they first started planting fields way back when.

Through the years we have developed means to improve the yield one can expect a field to provide and the best crop to plant for expected conditions but in the end it all comes down to the amount moisture the region in question receives.

A county by county map of Montana produced in part by the National Weather Service, the Department of Natural Resources and Conservation (DNRC), The Montana Climate Office and the Montana State Library shows the state as improved its drought conditions across the board when compared the monthly map released by the collective this November.

Their are two reports easily available to everyone. One is released on a weekly basis and the other is updated monthly and can be viewed at https://mslservices.mt.gov/Geographic_Information/Maps/drought/.

The process of determining the drought rating is a thorough process and goes well beyond the four groups that head up the report, "We coordinate with people in agriculture across the state," said Megan Syner of the National Weather Service. "We reach out to several agencies at the Local, Tribal, State and Federal levels to look at scientific data to address drought conditions. We also visit with farmers and landowners to collect anecdotal evidence as to actual conditions on the ground."

There are five Drought Classifications:

"It's taken over a year to move from D3 to D0," said Syner. "Record snowfall across the are in February certainly helped."

To date Blaine County has received 9.6" of moisture in 2018 a slight decline from the annual average of 12.7".

According to Syner the excessive moisture from last winter came at a time when the ground could best utilize and states that drought conditions are very intricate and can improve or decline rapidly.

The heavy snowfall last winter greatly improved top soil moisture levels but the further into the ground you go the worse the conditions get. 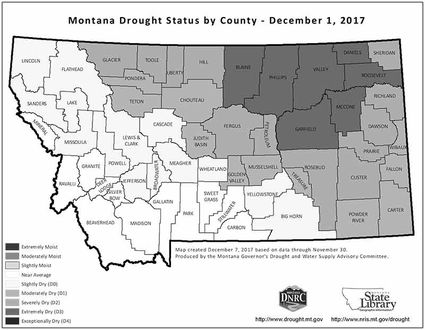 Across the state expectations are expected to continue to improve as long as we receive adequate snowfall ans normal spring rainfall.

"May and June are typically the wettest months in Montana so it is always a critical time in seeing what direction conditions will go," said Syner.

January and February are normally the dryer months across the state as related to precipitation levels adding more importance to spring rain, "Not much rain in May and June could lead to an increase in drought across the region," concluded Syner.

The Montana DNRC, The USDA/FSA Office in Chinook and the National Weather Service are all easily accessible places for folks to visit either on-line or in person to check on current conditions in the region.