Terry Grobofsky, June Reynolds, Pastor Valorie Putt, Bonnie Hellman and Mildred Dawson spent the better part of 2018 creating an incredible number of quilts from infant to adult in size. The group also made receiving blankets, burp cloths and lap quilts. They then donated them localy to the Sweet Nursing Home and to the HRDC Battered Woman's shelter in Havre.

Since the 1970's a group of quilters has gathered together at the American Lutheran Church in Chinook to spend the better part of each year to make quilts to donate at years end.

This year, Terry Grabofsky, the defacto leader of the group, June Reynolds, Pastor Valorie Putt, Bonnie Hellman and Mildred Dawson work hard creating numerous quilts that they then donated within the community.

They made quilts of all sizes, from infant to youth to adult and this year added lap quilts to the task at hand. From the beginning the group has donated all the quilts to the Lutheran World Relief program that sent them around the world to help where disaster had occurred and they were never sure where they ended up.

This year the ladies changed things up and decided to donate locally. They sent all the lap quilts to the Sweet Memorial Nursing Home so that residents could use them while moving around in their wheel chairs. They also sent four adult quilts to the Home and then sent the remaining quilts, burp clothes and receiving blankets to the HRDC Battered Woman's Shelter in Havre.

The Woman's Shelter serves both Hill and Blaine Counties and is always in need of help of any kind.

""I really like that were doing it locally now," said Bonnie Hellman. That change brought a smile to everyone involved with the process as well as those receiving quilts, "To see the looks on there face was amazing. To see the joy and appreciation was something else," Terry added.

"We kept a few for potential needs in the county, hopefully we don't need to use them but its nice to have them just in case," said Hellman.

The group gets the majority of their material through local donations as well as a Thrivent Grant that has their storage closet packed floor to ceiling.

While the quilting is done in the American Lutheran Church, it is not exclusive to Lutherans, "We've had members from nearly every church in town help," said Grabofsky. "Through the years we've had LDS, Assembly, Alliance, Catholic, Presbyterian, Methodist, no church affiliation is required."

The group usually meets on Thursdays of each week and are in the building from around 8:30 a.m. until 12:30 and of course that is including a coffee break expertly prepared by Mildred.

Each of the five has their own work station that allows the work to be efficient and seamless.

Bonnie pieces the tops together including six she did from home

Valorie runs the 'Serger/Overlock edger form that brings the edges of the quilt together.

Mildred does the tying, in addition to providing coffee and food for breaks.

Terry stated that the coffee break is open to all topics and nothing is left off the table, "We have talked about health, religion, politics, jokes, old time stories, traveling, family and those who aren't with us anymore."

This years group had an honorary sixth member, Doris Hamilton. Doris was a longtime member of the group but with her health being what it is she faithfully spends her time at home doing what she can to do her part.

This year she donated all of the burp cloths and some of the receiving blankets that went to the Women's Center.

The group has dwindled in numbers quit considerably since its peak when as many of 20 joined in the effort.

Marilyn Berger was the leader for many years before turning the reigns over to Terry. 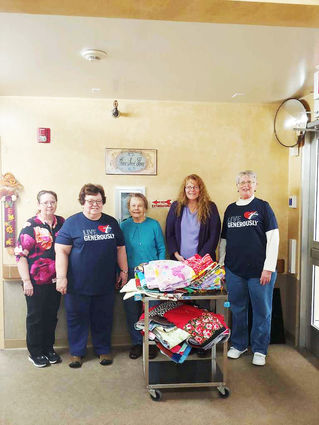 Making the delivery to the Sweet Memorial Nursing Home and HRDC Battered Women's Shelter in Havre brought many smiles.

"I don't know how I got to be the leader but they said I am so here we are," said Terry. "We are looking to get more people involved, looking for ways to increase our numbers."

They begin their quilting in January and go nearly every Thursday until the end of May when they stop for the summer. They then pick things back up in September and continue working on the quilts up until Thanksgiving when the break for the holidays and make their local deliveries.

"There are no skills required, even if you want to come and just join in the conversation, we would be happy to have you there," Terry added.

"A sense of humor is mandatory though," added Mildred Dawson.

The group does a great service to the community and really enjoy doing what they do and to now be able to share there quilts locally will bring a smile to everyone who is a part of it.