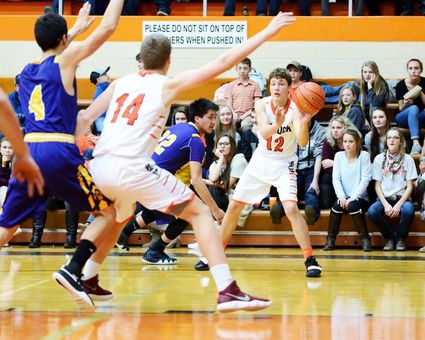 Toby Niederegger finds sophomore Reece Elliot for two of his 11 points in fourth quarter action against the Thunderbirds Friday night.

The Chinook Sugarbeeters and Hays/Lodge Pole Thunderbirds met Friday night in Chinook in the District 9C opener for both teams. The Sugarbeeters won a thrilling contest 56-44.

The Harlem Wildcats entertained the Malta Mustangs in the District 2B opener for both squads with the Wildcats coming out on top 63-55.

The Turner Tornadoes played valiantly in their District 9C opener against the North Star Knights but fell in the end 56-44.

Saturday had the Sugarbeeters in Big Sandy where a fast start led to a 66-27 win over the Pioneers. Hays/Lodge Pole picked up their first conference win in Chest...