Celebrating Fifty Years of Female Membership in the FFA 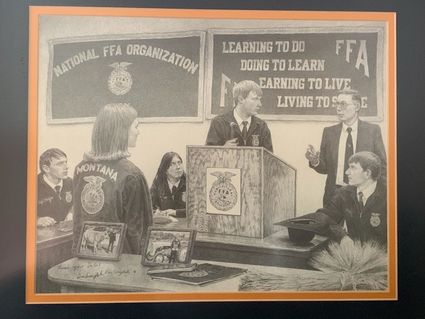 Fifty one years ago, those attending the 1968 National FFA Convention engaged in heated debate. Donald Shinn from New Jersey had declared on the business floor, "Any student who is regularly enrolled in vocational agriculture is entitled to become an active member of any chartered FFA chapter." At that time, approximately 3,300 females were enrolled in vocational agricultural classes. The motion was quickly seconded by Richard Posthumus from Michigan, but it was defeated. The FFA would not allow female memberships.

Then, one year later, on October 15, 1969, Paul Bankhead of California moved and Robert Craig of Michigan seconded once more to strike the word male from the National FFA Constitution with regards to membership. This time the motion carried, so in 1969 women were officially allowed membership into the National FFA Organization.

In the 50 years since the formal acceptance of female members, women have become an integral part of the organization. Not only in Montana but specifically in Chinook, women have achieved significant milestones, and they continue to shape the industry of agriculture.

The Chinook Chapter is one of the original charter chapters that formed the Montana Association when Montana received its charter on April 1, 1930. For 73 years and approximately 82 per cent of its life as a chapter, the advisors of the Chinook Chapter of the FFA were male. But in 2001, LeAnn Hogeland broke the gender barrier to become the first female advisor of Chinook's chapter. Since that time, Chinook has had three more female advisors: Lisa Johnson, 2003-05; Christina Marley, 2005-06; and Robin Allen, 2006-2010. After a brief absence, Allen returned in 2013 and is the chapter's current advisor.

One FFA program designed for beginning students enrolled in vocational agriculture (vo-ag) education, the Greenhand program was started in 1957. Its purpose was to motivate interest and activity in agriculture, leadership, personal conduct and citizenship responsibilities. Each of the eight FFA districts in Montana selects its outstanding Greenhand and enters that person in state competition. In an activity sponsored by the National FFA Foundation, as part of their Improving Agriculture and Leadership program, the Star State Greenhand is selected from this group.

The first Star Greenhand from the Milk River District was Roger Jergeson in 1962, followed by Kent Johnson from the Snake Butte/Harlem Chapter in 1963.

Historically, the Star State Greenhand will often go on to become a state officer, and this was true in Montana, as well. Cindy Klessens from Red Lodge was the first female Star State Greenhand in 1972. She went on to be the first female state officer in 1975, serving as treasurer. Klessens was also the first Montana-trained female to become a teacher of Agricultural Education in the state in 1979. Klessens was not the first female agriculture teacher in Montana, however. She was preceded by Donna Berg, a Colorado State University graduate who started the vo-ag program in Melstone in 1977. Together, these two women paved the way for other females in a previously male-dominated profession.

From Chinook's FFA Chapter, the only female Star Greenhand was Tanith Hofeldt in 1992. She did not go on to become a state officer, although her younger sister Shaina did. The only female State Officer to come out of Chinook as of 2019, Shaina served as the reporter in 2001.

In 1981, Valerie Stevensen from Hobson was the first female from Montana to earn her American FFA Degree. The American FFA Degree is considered the gold standard since it is the highest degree achievable in the National FFA Organization. Earning an American FFA Degree shows an FFA member's dedication to his or her chapter and state FFA association. It demonstrates the effort FFA members apply toward their supervised agricultural experience (SAE) and the outstanding leadership abilities and community involvement they exhibit through their FFA career.

To be eligible to receive the American FFA Degree, members must meet qualifications such as receiving a State FFA Degree, holding active membership for at least three years, completing secondary instruction in an agricultural education program and operating an outstanding SAE program. Community service, demonstrated leadership abilities, and scholastic achievement are also required.

The first person from the Chinook Chapter to earn an American Farmer Degree was John Hebbleman, Junior, in 1963. He was followed by Henry Gordon in 1970. Tanith Hofeldt broke another gender barrier as the first female from the Chinook Chapter of the FFA to earn her American FFA Degree in 1997. During that same year, the daughter of Henry Gordon, Trisha Gordon also earned her American Farmer Degree. Other females earning Gold Standard status with the FFA include Mitzi Liddle (1999), Kyla Hofeldt (2001), Jessica Overcast (2001), Ashley Molyneaux (2001), Julianne Sather (2001), Shaina Hofeldt (2002), Miranda Sather (2003), Rylee Strauser (2003), Jennifer Baird (2004), Kayla Williams (2008), Jaycie Mitchell (2013), Tavin Schneider (2015), and Carol Warburton (2017). Hailey McMaster submitted her American FFA Degree application this year, and according to Allen, McMaster's application made it past state review and is awaiting approval at the national level.

"It is highly likely that she will be another strong female," Allen said.

In 2012, the Chinook Chapter of the FFA was ranked number five on the list for earning the highest number of American Degrees, with 31. That number is now 38 and about to grow to 40. To celebrate this meritorious achievement, Henry Gordon purchased a plaque that bears a gold plate imprinted with the name of each American Degree recipient. "To earn an American Degree is a huge achievement," Gordon said. "I applied three times before I finally earned my degree!"

In order to qualify, a student-after entering agricultural education-must earn at least $10,000 and have productively invested $7,500 with an SAE. In addition to maintaining records to substantiate an outstanding SAE, through which the member has exhibited comprehensive planning as well as managerial and financial expertise, applicants must also show evidence of superior leadership abilities, extensive community involvement, and scholastic aptitude, earning a "C" average or better. Furthermore, they must have participated in at least fifty hours of community service within at least three different community service activities. These hours are in addition to and cannot be duplicated as paid or unpaid SAE hours.

Although the most recent Blaine County recipient of the American Degree is not female, Wade Schneider received his honors this past fall. His will be the newest name to go on the plaque donated by Gordon.

In fulfilling this achievement, Schneider was required to complete an eighteen page electronic application that outlines his SAE and to document his steps towards entrepreneurship. In completing those sections, he began in 2012 with his Animal Systems pathway, describing his work with Schneider Farms and with owning a cow/calf pair.

As time progressed, Schneider established Wade's Pigs, raising market hogs for the Blaine County Fair in addition to growing his cattle herd. By 2017, he had six head of cattle.

The application also calls for a candidate inventory statement, an income and expense summary, and a financial balance sheet statement-listing assets and liabilities as well as personal contributions and net worth. The financial balance sheet must also reflect earnings and productive investments while recording any unpaid hours and educational expenses.

When asked what, if any, impact or influence earning an American FFA Degree had on their current employment/career paths, several women responded.

Trisha (Gordon) Gruszie, one of the first females from the Chinook Chapter to earn her Degree, had this to say: "FFA in general has had more of an impact on my life as a whole than anything else I have ever been involved with. The levels of degrees which members have a chance to obtain help set us up for success the rest of our lives. As a young kid, I always looked up to my father's trophy from obtaining his American Degree, and early on I decided I wanted one, too. Setting this goal was just the beginning of many small goals and accomplishments along the way to success. In the 90's, we didn't have the Discovery Degree, since we weren't allowed to start our FFA career until high school. Getting one's Greenhand, Chapter, and State Degrees are all great accomplishments, but the accomplishment of the American Degree is a true honor. To obtain this goal, your SAE doesn't end with high school; a person must put forth the extra effort to continue the paperwork and projects to finally earn the degree without the advisor or classroom time helping you along. So, earning this set me on a path of setting and achieving goals. I carry these skills with me today and try to teach my children to be goal orientated as well."

Another Degree holder, Rylee Strauser (2003), who is self-employed as a rancher and has a government contract for cleaning, landscaping, and snow removal, concurred: "It's hard to condense something that's been so important in my life. Of all the leadership activities I participated in growing up, FFA had the most profound effect on my life. It has influenced my career and who I am as a person. The leadership programs taught me how to be a strong individual with a voice, and the SAE projects helped prepare me to run a business. I run a herd of cows with my parents, Bim and Janas Strauser, on 66 Ranch."

Although the FFA and Montana State University (MSU) Extension Service are not affiliated, the two are like-minded entities. The FFA is a national organization that promotes and supports agricultural education, and MSU Extension is an educational resource dedicated to improving the quality of people's lives by providing research-based knowledge to strengthen the social, economic and environmental well-being of families, communities and agriculture enterprises.

Given these similarities, it is not surprising that a former FFA member might find a career as an extension agent. As part of the MSU Extension educational outreach network, Blaine County Extension and its agents address needs identified by the people of Blaine County. Juli (Sather) Snedigar, the Ag and 4-H Agent, said: "Earning my American FFA Degree remains one of the most important personal achievements of my life. After graduating high school, I went into college undecided on what I wanted to be 'when I grew up.' While I was in college that first year, I remained dedicated to completing my American Degree application. That process kept my focus in agriculture. By earning my American Degree, I knew I could work to achieve whatever I set my mind to."

While the letters FFA stand for Future Farmers of America, the FFA is not just for students who invest time in agriculture-related endeavors or who want to be production farmers. FFA also welcomes members who aspire to careers as teachers, doctors, scientists, or business owners. For this reason, the name of the organization was updated in 1988 after a vote of national convention delegates to reflect the growing diversity and new opportunities in the industry of agriculture.

One of those business owners is Kayla (Williams) Hudon, who earned her American FFA Degree in 2008. She currently operates Little Raskels Daycare, a licensed Group Home Child Care, in Harlem. With a capacity for twelve children, her business mission is to provide safe, reliable childcare in a clean and child-friendly atmosphere.

"I believe that my American FFA Degree was a leading tool in teaching and guiding me to be the business owner I am today," Hudon stated. "An SAE taught me the value of keeping records, being a leader, and inspiring children to achieve their goals. I may not directly be in an agricultural field, but I do believe that earning my Degree installed the knowledge that even though you're not the producer, you still have the ability to make a huge impact on the leadership of your community."

These local women credit their time in FFA for developing the leadership skills that would take him far in life. Goal-setting, persistence, strength, voice, business sense, focus, dedication, and record keeping are additional skills they all began developing while wearing their blue corduroy jackets trimmed in gold.