South of the Border, "Road trips of interest in Montana from Whitlash " 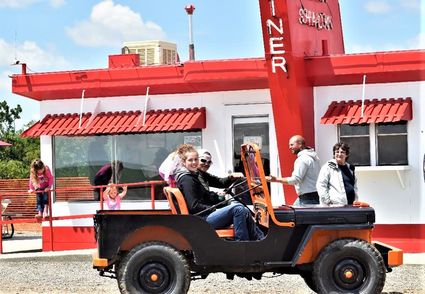 Erin and Eric Pula, of Chinook, are pictured in the post-World War II Jeep restored by their grandfather, Lyle Harrison. Harrison, of Rudyard, painted the vehicle with an orange and black theme, the school colors of the old Rudyard Panthers. The colors are the same as Erin and Eric's high school in Chinook. The passengers and vehicle were part of the recent Blaine County Cruise that made a lunch stop at the Sugar Shack just outside Rudyard.

Columnist's note: My wife and I have been in Whitlash just over six months. After 20+ columns related to the Sweet Grass Hills I decided to write about a couple of interesting stops we've made in Montana outside the Hills during the same period.

On my bucket list to visit for some time, we finally stopped in the town of Fort Shaw to see where the 1904 "world champion girls' basketball team" was launched. Since reading "Full-Court Quest...," a 2004 book about the school and the famous team, I'd wanted to visit the site.

Another stop involved the Sugar Shack in Rudyard, an old rail car diner-style eatery that originated in Chinook and is now owned and operated by Sugarbeeter Kim Seidlitz and her family. It was fun to see the old diner up close and learn how it's being repurposed.

Lastly, during an overnight stay in Missoula we came upon the national headquarters of the Rocky Mountain Elk Foundation (RMEF). Tucked in along the north edge of town, the Foundation's headquarters made for an interesting visit, even to non-hunters like us.

I hope readers might find these nearby locales of interest.

Fort Shaw, 26 miles west of Great Falls on MT 200, was the site of a military fort from 1867-1891. Built to protect the northern country, particularly travelers from Fort Benton to Helena, the fort was abandoned in 1891 and the facility soon became the Fort Shaw Government Industrial Indian School. The school was one of several government boarding schools started in the 1880's to "eliminate traditional American Indian ways of life and replace them with mainstream American culture."

Fred Campbell became Superintendent of the school in 1898, just a few years after the game of basketball was invented back East. Campbell recognized the athletic skills of a group of girls at the Indian school and organized a girls' basketball team. As they improved and beat most of the local high school and college teams in Montana, he prepared the girls for a five month stint at the World's Fair in St. Louis. They beat every team they faced, capping the run with a three-game win over the Missouri All Stars, earning the Montana girls the title of "world champions." The Fort Shaw school closed in 1910 as student numbers fell from their high of around 300.

There is very little physical evidence left of the fort or the school. An impressive monument was erected several years ago to memorialize the famous basketball team. The Fort Shaw Elementary School is now on the site with a couple of remaining houses once used by military officers when the site was a fort. Still, a visit is worth the short drive to the northwest edge of the community. Additional historical exhibits are said to be open during the summer.

The Sugar Shack rail-car diner has taken a

Kim and Rory Seidlitz reopened the Sugar Shack on May 13 at its new location at the entrance road to Rudyard. The diners, designed for ease of transportation and quick set up, arrived in Chinook in about 1950 and was set up on the parking lot of Biff's Truck Stop. In 1959 the diner was moved to Conrad where it operated for nearly 40 years, then set vacant for a few years. In the mid-1990's Pete and Maxine Woods moved the eatery to Chester, back on Highway 2.

Kimberly Seidlitz said, "It's really neat that I can operate the diner that started out in my home town of Chinook (She's a Sugarbeeter, class of 1991)." Already the diner has a new coat of red paint which she said, "Is actually the original color scheme." A handicap accessible toilet had to be added to the rear of the diner and an outdoor seating area was also created. Kim says things are going well and soon there is new outdoor advertising along Highway 2 alerting travelers to the repurposed diner.

Recently the Sugar Shack hosted the Blaine County Cruiser's road trip-to Chester from Chinook with intermittent stops. Despite some rough weather on the day of the road trip, the weather turned nice for the 40 cars that were part of the trip. With only 10 stools in the diner, the meal was served outside. Kimberly said of the Cruisers' visit, "It was wonderful."

Not only is a visit to the Sugar Shack a nostalgic return to the 1950's, the food is authentic "diner fare" and great. Find the menu, contacts and hours on their website: http://www.sugarshack406.com/menu. Or, call 406-399-1830 for information about the iconic diner.

Rocky Mountain Elk Foundation: from a doublewide in Troy to a national headquarters in Missoula

After spending the night on the northside of Missoula, just off I-90 at North Reserve Street, I was taking a morning walk along Grant Creek and discovered the odd looking roof I could see from the motel belonged to the Rocky Mountain Elk Foundation's (RMEF) national headquarters-an impressive 63,000 square foot complex completed in 2004, set on 10 acres. Later my wife and I spent time in the visitors' center looking at the exhibits in the museum (with hands-on conservation displays for all ages), browsing the gift shop and walking through the adjacent outdoor interactive riparian bottomland exhibit that shows and explains examples of elk habitat. 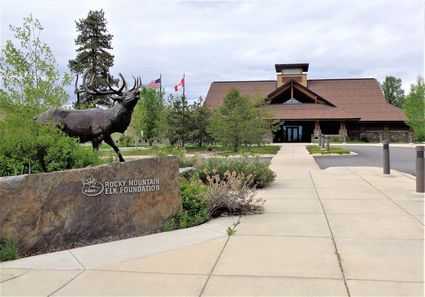 This is a view of the entrance to the national headquarters of the Rocky Mountain Elk Foundation, on the north edge of Missoula just off I-90. Begun in 1984 by four hunters in Troy, Montana, the 230,000-member group now supports conservation, sound wildlife management and preserving of elk habitat. At the headquarters facility there is a museum with interactive exhibits and an outdoors walk-through exhibit about elk habitat. Both are free.

Though not a hunter, I'd heard of the RMEF, even read the groups showcase publication, "Bugle" in a doctor's office as I recall. I was not aware the group was founded by four hunters from Troy, Montana. The foundation had its modest beginnings there first working from a doublewide trailer. There are now about 90 employees at the headquarters in Missoula and another 30 working around the country on multiple conservation and fundraising projects.

RMEF currently has 235,000 members, 500 local chapters and 12,000 volunteers supporting the group's mission: "conserving, restoring and enhancing natural habitats; promoting the sound management of wild elk...and educating members and the public about habitat conservation and our hunting heritage." Through 11,800+ projects RMEF has conserved more than 7.4 million acres of habitat for elk and other wildlife since the foundation's beginning in 1984. The group has restored long-absent elk in such diverse areas as the eastern coalfields of Kentucky to the Great Smoky Mountain National Park.

Less than a mile off I-90 on the northern outskirts of Missoula RMEF headquarters is worth a visit to see the museum and outdoor riparian exhibit-all free of charge. The address is 5705 Grant Creek Road (extension of North Reserve Street). For information about visitors' center hours, group reservations, RMEF membership, volunteer opportunities or upcoming events see the website (www.rmef.org) or phone 800-CALL ELK.