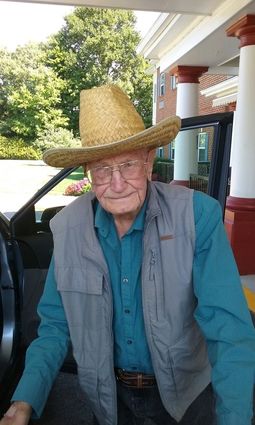 John Chester Herndon "Sanitary John", died at the Waterford Assisted Living in Virginia Beach 3 days before his 102 birthday from a stroke.

John was the son of the late James Herndon and Mary Beth Goggins. He was born 9/23/1917, in Omaha,Nebraska. His mother died of typhoid fever when he was only three months old. John lived withdifferent family members in Arkansas, Omaha, Scottsbluff Nebraska, and Cheyenne, Wyoming. At 15John went to live with an aunt in Sacramento where he completed high school, From a young age John had to support himself and what money he did earned when living with his father and stepmother hehad to give to his stepmother for room and board. John did whatever job he could get includingroad/home construction, clerk, pumping gasoline, yard work, shoveling snow, selling fish to local markets to name a few.

Before the war, John received a 2 year degree in Botany at a community college In Sacramento. He enlisted in the Army in 1941. He was primarily stationed in the Aleutian Islands where he worked radar. After his enlisted was over in 1945, he moved to Spokane, WA, where he continued to support himself. He attended both Gonzaga and Whitworth Colleges at the same time majoring in Bacteriology. One of the jobs he liked and talked about the most was when he was a bat boy for the New York Mets. He met and married Mary Larango August 21, 1947 in Spokane, WA. They moved back to Montana and John completed his degree at Montana State. His first Job (while his wife stated in Montana) was in Atlanta as a bacteriologist for Coca Cola. He did not like the job or Atlanta and returned to Montana. John and Mary moved to Chinook in 1953 where he was a Sanitarian for Blaine and Hill Counties until his retirement.

Before and after moving to Virginia John would be seen walking the neighborhood, stopping for coffee, visiting with locals and spent hours reading In the library. He always seemed to know what was happening in the neighborhood. After his wife's death in Jan 2010 John spend summers in Montana where he raised his garden and wintered In Virginia. In October 2013, John moved to Norfolk, VA to be closer to his daughter Lucia. Even though he considered Montana to be home, he truly enjoyed his time livingIn Virginia where he met and had many close friends.

An article printed In the Blaine County Journal celebrating his 100 birthday. Many people shared stories of "Sanitary John" as he was known about his smoking stinky cigars, passion for gardening, reading and fishing. Everyone who knew John always noted how extremely intelligent and well-read hewas. Until the end John never lost his desire to keep on learning, his strong belief in the education, love of fishing,gardening and telling stories.

He is preceded in death by his parents James and Mary Beth Goggins,brother James, wife Mary, Son Steve. He Is survived by his daughter Lucia along with numerous nieces, nephews and good friends.

The list of people to thank for all your love and support to me and dad is endless but you know who you are. You all mean more to me than you will ever know. A Celebration of life will be October 26 at 9:00 am at ST. Gabriel's Catholic Church Chinook, Montana. A gathering will take place Saturday evening at the Eagles. Memorial services at Waterford Assisted Living at 2 pm 10 Nov in Virginia Beach, Va. In the lieu of flowers, friends are asked lo plant your gardens, in memory of John.