A Navy Tug, A Barracks Barge And A Pacific Typhoon 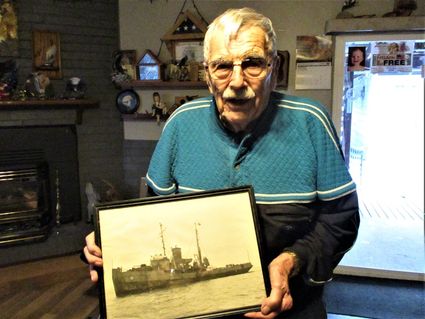 Ray Reid, of Chinook, is shown with a photo of Navy tug APL-10, an auxiliary tug rescue ship that helped large ships during repairs at sea or when docking. The APL-10, with Ray a member of the crew, was towing a barracks barge from Japan to Hawaii, in 1946, when a typhoon hit the tow. The storm disabled the tug and separated the barracks barge. Both the tug and barge were eventually rescued near Wake Island, 2300 miles west of their destination.

Correspondent's note: A fellow Chinook senior coffee drinker, Larry Wisch, asked me a few weeks ago if I'd ever heard about the weird event that happened to Ray Reid at the end of World War II. I finally connected with Ray on one of our trips back from Whitlash and he shared a remarkable story.

Ray admitted, "I've forgotten some of the specifics, like the time of year and some other details. I wrote an essay about the experience for a class I took at teachers' college after the war. Now I can't find the essay." The incident happened 75 years ago so I could understand a few particulars might have slipped about how it all happened. I'll have to say, though, at age 93 Ray still recalls the harrowing experience with great clarity. Here's some of what he shared with me about the tug, a barracks barge and a Pacific typhoon.

It started with a mission to tow a barracks barge from Nagoya, Japan to Hawaii

Ray Reid was drafted in 1944 but allowed to finish high school and help with the farm harvest before he entered the Navy in the fall. He was assigned to ATR-10, an Auxiliary Tug Rescue ship. The tugs were used to assist larger ships during repairs at sea and when docking. ATR's were built by varying companies, each ship 160-feet long, with a wooden hull. ATR-10 had a steel hull from the water line down. Ray recalled the ship had a crew of 35-40 sailors, some of whom were specialists like the onboard diver and a specially trained mechanic. There were 80 of these tugs in use during World War II.

Ray's ship was tasked with towing a barracks barge (sailors referred to them as "floating hotels") from Nagoya, Japan to Hawaii. This was in 1946, during the occupation activities associated with Japan's surrender. Barracks barges first appeared during the days of sailing ships as temporary housing for sailors without a ship.

During World War II the Navy added 58 barracks barges (identified as APL's), some accommodating as many as 500+ personnel. The barges had no means of propelling themselves, but were equipped with some defensive weapons. The barracks ships were used to house servicemen from all branches where lodgings were not readily available or needed temporarily. Some barges were used for office space as well as other purposes. Ray recalls this barge was not one of the larger ones and would perhaps house less than 100 people. At the time of the tow about seven crew members were on board the barge.

Ray's tug was attached to the barracks barge with a three inch diameter cable and the tow headed for Hawaii, 4000 miles south. About one or two days in to the trip a typhoon hit the tug and barge. Navy records show there were 19 typhoons that occurred during 1946 in this area from March to the end of November. The storm's turbulence created slack in the cable and the cable broke. Part of the cable connected to the tug got tangled in the tug's propeller, causing the ship to lose power and maneuverability. The barracks barge soon drifted away and was never seen again by the tug's crew.

The storm, per Ray, caused such high swells that "when we were in a trough we had to look straight up to see the sky." Ray said, "The swells caused the tug to roll thirty degrees each way. The tug was top heavy and we began to get rid of everything we could on the deck to reduce the roll." The captain ordered a 40-foot long open lifeboat, attached on a lifting device, to be cut loose-an open boat was useless in the typhoon but smaller life rafts were kept. We tossed the ammunition for the mounted guns overboard." To abssorb the shock of the tug bottoming out in the swells, the crew stood on their toes and 'bounced' when the tug hit bottom. It was impossible to sleep in the bunks stacked three high because the rolling tossed the sailors out of their bunks. Ray said, "I slept under a tank in the engine room to keep from rolling around."

When the storm first hit the tug an unsecured 55 gallon drum smashed into the frame of the cover that was closed to protect the engine room. The seawater poured in and shorted out the electrical system. With the cover open to the storm Ray said, "We formed a bucket brigade to take the water out of the engine room." The wooden hull of the tug, having earlier dried out, allowed more water into the ship. During this time, with no power, there was no way to prepare food. "We ate a lot of dry bread for several days," Ray recalled.

For several days the storm raged and the tug drifted. Finally the storm abated and the crew was able get a boiler started to power up a generator. The diver on the tug untangled the broken cable from the propeller. With some power restored they were able to contact an assist ship that came to help them make repairs and get underway again. The tug was found, after the storm, near Wake Island, 2300 miles west of Hawaii and 2100 miles southwest of Japan, where the tow began. The barracks barge was later rescued in the general area of Wake Island. Able to move at only a third of its normal speed, the tug eventually docked at Treasure Island, a naval facility off the coast of California.

A check of some Navy records from World War II suggests the tug was likely decommissioned and scrapped though I couldn't find a specific record for ATR-10. The old tugs not scrapped were eventually sold to private businesses or passed on to allied countries.

Ray didn't know the number of the barracks barge (APL designation) in the tow. A few of the WWII floating hotels were later retrofitted to be self-propelled. The updated WWII barracks barges and some more recently added housing units were used during the Vietnam War. A few barracks barges are still in use at facilities around the world-being used for living quarters, offices and other functions. 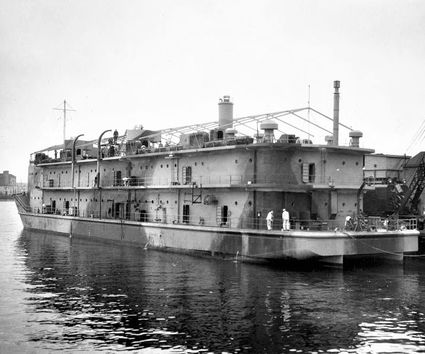 This is a photo of a barracks barge used during WWII to house sailors and other service members. The barges were towed and placed where temporary housing was needed. In 1946 Ray Reid, a Navy veteran from Chinook, was on the crew of a tug pulling a similar barge from Japan to Hawaii when a typhoon hit the tow. The two ships separated and eventually were rescued 2300 miles from their original destination.

I asked Ray, "What were you feeling during that storm?" His reply was, "I guess I was young enough I didn't have sense enough to be scared." Thanks again to Ray and the rest of the Greatest Generation for their acts of bravery, courage and sacrifice that won the war.