South of the Border: Estonians - Builders from the Baltics in Liberty County 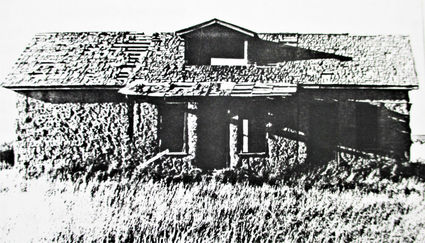 This photo shows one of two Estonian sod huts built northwest of Chester in the early 1900's. The 18' by 45" structure had five rooms and a loft. The bricks used to construct the house were made on site and weighed about 50 pounds each. The house had a wood floor and a shingled roof. The two houses survived almost a century before succumbing to the elements a few years ago.

Columnist's note: My rancher friend Bob Thompson asked if I knew about the pioneer-era "sod houses" northwest of Chester. He explained a couple of sod houses were built by Estonians who had a sizeable settlement northwest of Chester in the early 1900's and that several descendants of the original homesteaders still farm in the area. Thinking that might be a topic for a column, I discovered the influence of these builders from the Baltics reached beyond their original settlement just north of Tiber (an old post office site five miles west of Chester on Highway 2). Here's some of what I learn...