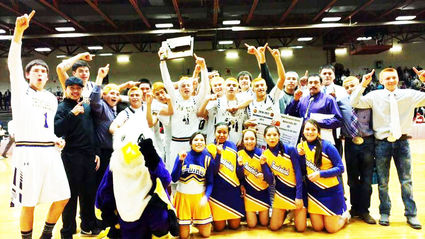 The 2017 Hays/Lodge Pole Thunderbird's were the marquee team of Head Coach Derrick Shambo's tenure. The team suffered one defeat to eventual State Champion Arlee in the season opening Native American Classic. The Thunderbird's second lost came in the District 9C Championship to the Box Elder Bears. Hays/Lodge Pole then went 3-0, defeating the Bears in the finale to claim the 2019 Northern C Crown. At the State Tournament the Thunderbird's were 2-2 finishing their 2016-17 campaign with a 24-4 overall record. Shambo resigned recently as mentor of the Thunderbird Varsity program. Derrick will maintain his position as head coach of the 5th-6th grade and Junior High Thunderbird boys basketball teams.

The Hays/Lodge Pole Thunderbird Boys Basketball team has had a remarkable run the past four seasons and that is due in large part to the amazing contribution from Head Coach Derrick Shambo. Shambo took over from one of the most successful mentors in school history, Charlie Ereaux, and continued the powerful tradition put in place.

Shambo guided the Thunderbird's to a pair of Class C State Tournament appearances in 2017 and 2019. His teams were highly entertaining to watch and one could never count them out. He dealt with heavy roster turnover year to year and regardless how the team perform...