Amber and Eric Miller arrive at a benefit held in her honor on Saturday, June 13. The Bear Paws Saloon and a plethora of volunteers put on the benefit to help 'Amber Ace'. All proceeds will go to Amber to help defray medical costs. She was recently diagnosed with Stage 3 Cervical Cancer and just concluded her final treatment on June 15.

Chinook resident Amber Miller, known to many as 'Amber Ace' was diagnosed with Stage 3 Cervical Cancer a few months ago. Last Monday, June 15, she completed her final treatment and is looking forward to receiving a clean bill of health. In addition to the many difficulties associated with Cervical Cancer, another is the huge amount of financial stress immediately placed on the individual. Amber Miller is a familiar face to many in the area, helping people out with all of their needs at Chinook Ace Hardware.

Time and time again, the citizens of Chinook, Blaine County and the Hi-line have stepped up to help one of our own in a time in need and on Saturday, June 13, we did so again. The 'Amber Ace' Benefit took place at the Bear Paw Saloon with a silent auction as well as a live auction, a great meal and live music. A fantastic turnout was on hand to show their love and support for Amber.

JD and Joanne Powell, owners of the Bear Paws Saloon hosted the event. They served up a Taco/Pork Loin dinner free will donation meal inside the bar located on the north end of main street. On the patio out back a full-service bar and corn hole was available for attendees to enjoy the event. Out front on main street the silent and live auction items were displayed, and a stage was erected in front of Dan's NAPA for the TJ Overcast band to entertain the crowd. "It was fantastic, the turnout was way beyond our expectations," stated JD. Joanne added, "It was such a good time, everyone seemed to enjoy themselves and everything went off better than planned." Rob and Sue Reid, owners and operators of Chinook Ace Hardware were heavily involved in the benefit as well.

Michelene Edwards and Jami Huestis Boettcher began the benefit by setting up early in the day. Kevin Elias and Roger Olson donated 60 pounds of hamburger for the Taco feed and JD, Kris Parsons and Clayton Parsons cooked and prepared the meat. Dennis Cross smoked 25 pounds of pork loin to perfection to add to the meal. Theresa Waters and Lonnie Miller helped keep patrons happy and served the crowd with refreshments throughout the night.

To make any benefit or social gathering a success it takes a dedicated group of volunteers to complete the task at hand. In addition to the setup, dinner and service crew many other individuals donated their time to help the benefit out. Dan's NAPA provided much of the outdoor electricity for the stage and other necessities on main street. Pike Construction made sure there were plenty of outdoor facilities on hand, providing the porta potties. Rad's Deli donated the tomatoes and lettuce for the Taco Feed. Kevin Elias handled the live auction. The Chinook Area Chamber of Commerce provided all the tables on main street for guests to enjoy their meal comfortably, visit with friends and listen to the band.

"This couldn't have happened without the support of the Blaine County Health Department," said Joanne. "They helped us with getting all the protocols put in place and provided us with the necessary tools for patrons at the benefit. The Chinook Police Department was a huge help as well. They ensured all rules were followed, provided assistance wherever needed and offered tremendous support. Sometimes I don't think their help is stated enough."

Tammy Bergman and Susie Berger handled the silent and live auction receipts and were very impressed with how successful both auctions were. "It was phenomenal," said Tammy. "We ran the silent auction from 5:00 – 6:30 p.m., which was a little longer than we planned but bidders were really involved in the auction, so we kept it open a little longer." Susie added, "It was really amazing, some people paid more than their winning bid was or increased each bid by way more than the typical $5 amount."

"Turnout and participation in the silent auction went beyond anything we expected. There were a number of individuals who didn't actually buy anything in the auction but simply made a donation to it," commented Bergman. "The live auction was another huge success. Kevin (Elias) did a great job getting the bids up while also providing plenty of humor and commentary to the auction." 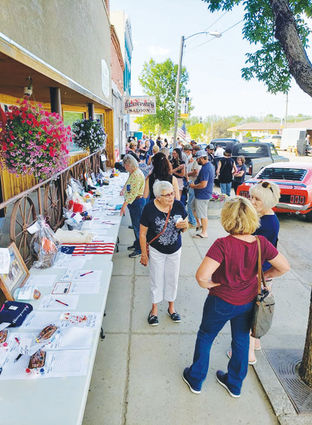 Lining the sidewalk in front of the Bear Paw Saloon was a row of tables with silent auction items for folks to bid on at the Amber Miller Benefit. Also on display were items that were auctioned off during the live auction, giving bidders an opportunity to view the items prior to the start.

Local musician TJ Overcast, and his band set up a makeshift stage on a trailer in front of Dan's NAPA and provided a great mix of country rock music from 7:30 until about midnight. Folks enjoyed the sounds with some great comradery, beverages and dancing. Outside of a brief storm that went through it was a fantastic evening on main street. While the storm may have made things a bit wet it never dampened the atmosphere at all.

"The turnout was amazing," said Bergman. "Beyond the wonderful people of Chinook, we had plenty of items donated for the auctions and support for the benefit from people in Harlem, Turner, all over Blaine County, the Hi-line and Montana in general. We even add some folks from out of state show up for the benefit."

Amber and her husband Eric were able to attend for a few moments, thanking everyone for their support and while enjoying a few smiles with friends. Amber and Eric along with all of their friends and family are overwhelmed with the community support. They stated that they are extremely humbled by the community's generosity and thankful that so many were on hand to show their support. Hopefully a clean bill of health is in store and 'Amber Ace' will be back in the store greeting customers with that huge, infectious smile.