'Beeters fall in Belt 30-28, Host Cascade Friday with Playoff bid on the Line 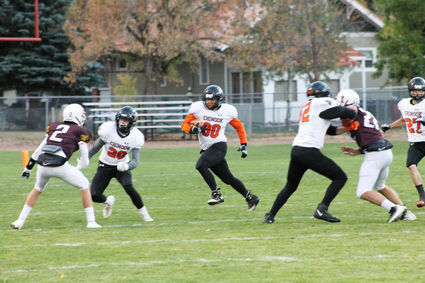 Senior Ethan MacLeod returns a kickoff Friday night in Belt. MacLeod has done a little bit of everything for the 'Beeters this season. The senior has played on both the offensive and defensive line, played linebacker, ran the ball, caught the ball and returned kicks.

The Chinook Sugarbeeters were in Belt this past Friday with an opportunity to secure a playoff spot. Unfortunately they fell to the Huskies in the final minutes 30-28. The post season is still on the table for the 'Beeters, and they will have a chance to lock up a spot this Friday when they host the Cascade Badgers.

Chinook took the opening kickoff, and junior Hunter Molyneaux set the offense up with a nice return.

The 'Beeters put together a fantastic opening drive that covered 63 yards in eight plays. Molyneaux had runs of 10 and 14 yards along the way and found the end zone from seven yards out to give the 'Beeters a early 6-0 lead at the 8:53 mark of the first quarter. Molyneaux carried the ball six times for 47 yards on the opening drive.

The Huskies are a talented team as well and wasted little time in responding to the Chinook score. Belt strung together a nearly six minute drive that culminated with a touchdown and two-point conversion to take a 8-6 lead over the Sugarbeeters late in the first quarter.

The 'Beeters had the Huskies in a third and four situation to start the second quarter but a 49 yard touchdown run by the Huskies suddenly had Chinook down 16-6 with 11:48 remaining in the half.

The Sugarbeeters responded with a nice drive, and senior Reese Elliot hauled in a pair of nice catches along the way but the drive would stall at the Huskies 25.

The 'Beeter defense would respond with a solid effort, giving the ball back to the offense deep in Belt territory. Senior Quarterback Benton Elliot found junior Drake Berreth on a nice pass play down to the three yard line. Reese then headed to the corner of the end zone for a three yard touchdown reception. Following the two-point conversion, Chinook was down 16-14.

The 'Beeter defense stood tall and forced a turnover on downs, setting the offense up at the 'Beeter 20 yard line. On second down Molyneaux slipped a tackle in the backfield, changed direction and headed up field through the middle of the Husky defense. Molyneaux veered to the left and picked up 46 yards to the Belt 11 yard line.

Elliot then made a nifty move to escape pressure and found a wide open Berreth in the corner of the end zone for a 11 yard touchdown. The conversion attempt was no good and the 'Beeters headed to halftime with a 20-16 lead.

The two teams exchanged possessions early in the third quarter with the defenses taking control of the action.

Belt would eventually break through, scoring on a long pass play with 7:32 left in the third quarter to take a 22-20 lead. Neither team would score again in the third as they entered the fourth quarter in a tight two-point contest.

The 'Beeters answered with a long methodical drive that featured both the run and the pass. Sophomore Tyler Schoen picked up six yards on the ground, senior Ethan MacLeod took the shovel pass from Elliot and rambled to the Husky 23.

Reese Elliot hauled in a 17 yard reception to the six yard line. Schoen carried for three yards and then caught a three yard pass from Elliot for the touchdown. Elliot added the conversion run to give the Sugarbeeters a 28-22 lead with 9:24 remaining. 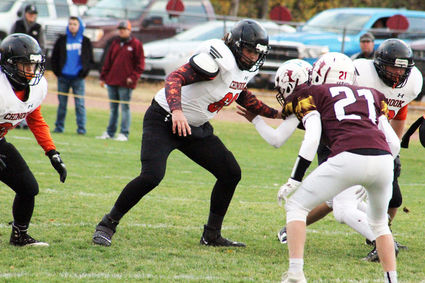 Schoen made a huge play defensively, making a big stop in the backfield and MacLeod forced the Husky quarterback out of bounds for another nice play.

The 'Beeters forced the Huskies into a fourth down at the 5:20 mark but were called for pass interference, keeping the Husky drive alive. Belt would score at the 3:37 mark to give the Huskies a 30-28 advantage.

Chinook was never able to get anything going down the stretch and after a fourth down pass came up short the Huskies had earned a 30-28 win over the 'Beeters.

The Sugarbeeters still have a chance to secure a spot in the post season. The 'Beeters will host the Cascade Badgers this Friday with the winner securing the No. 4 Seed out of the South and the opportunity to travel to Fairview and take on the Warriors in the first round of the Montana Class C Eight-man Football Playoffs.