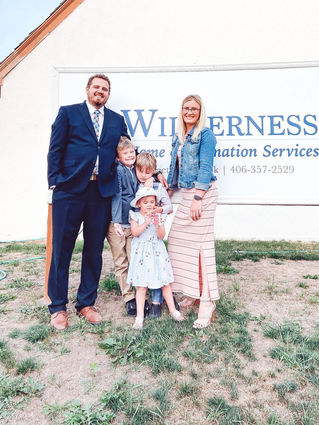 Pictured with his family is Daniel Dahl. Daniel is the Chinook Area Chamber of Commerce President, the Chinook School Board Chairman and owner of Wilderness Funeral Home and Cremation Service in Chinook.

The Holiday Season is a special time of year, filled with joy and hope and accentuated by the thrill of giving and helping others.

Traditionally the start of the Holiday Season starts Thanksgiving Day and runs through the New Year. In recent years that trend has began to inch its way back to Halloween with Christmas lights going up and Christmas sales starting earlier and earlier.

The act of giving 'faithfully' is unrequited, often done anonymously or with as little fan fare as possible. The act of 'doing' is the same, providing something tangible for others to benefit from.

As kids, we all loved the thrill of tearing open presents just to see whats inside. As we become older, especially for parents, the joy of giving tends to take over. Many folks look forward to the opportunity to help during the Holiday season more than the rest of the year. Some among us do it year around.

This Holiday Season I would like to spread the word about some of these individuals and gladly look to our readers for direction in recognizing these deserving people. To begin, I would like to recognize Daniel Dahl and Randy Perez for their contributions to the citizens of Blaine County.

Daniel is relentless in his day to day activities. He serves as President of the Chinook Area Chamber of Commerce, Chairman of the Chinook School Board and provides a caring and devoted service to the community as owner of Wilderness Funeral Home.

Daniel, along with his wife Kadie and children Daniel, Rutledge and Alice have called Chinook home since relocating from Alaska in 2016. Daniel purchased Edwards Funeral Home and eventually re-branded the name to Wilderness Funeral Home and Cremation Service.

Kadie is extremely proud of her husband, "Daniel has a servant's heart and takes pride in being able to serve the people of our community, not only for funeral services, but also with the Chamber of Commerce and the school board."

Daniel credits his dedication to his upbringing, "A big part of who I am is because of my faith. We're taught to serve others and treat others how we want to be treated. I want this community to thrive in its own unique way, and I want to contribute to that in any way I can."

When not organizing events like the Chinook Sugarbeet Festival or the Parade of lights you can be sure Daniel will be in attendance at community fundraisers or charitable events including the Harlem Friends of the Library Banquet, Chinook Golf Banquet and the Blaine County Wildlife Museum Banquet among others.

When it comes to capturing Blaine County with pictures there is no one better than Randy Perez. Basketball, football, volleyball, if its being played in Chinook, Harlem, Hays/Lodge Pole or Turner there is a near 100% chance Randy is in one of those gymnasiums. Randy takes his camera to gatherings of all kinds, Powwows, funerals, banquets, rodeos and anywhere there might be a horse.

Randy's itch for photography first started back in 2000 and really took off following the Harlem Boys Basketball State Championship a few years later in 2002, a 69-67 win over Wolf Point. That same year the Hays/Lodge Pole Thunderbirds captured the Class C State Championship with a 90-71 win over the Heart Butte Warriors. From that point on Randy was hooked.

Randy says he still has a ton of old film from the early years that he hasn't gotten to. Things really took off in November of 2009 when Randy joined Facebook and began uploading photos for the world to see.

"After the Harlem State Championship I started taking pictures of everything, but basketball is my favorite," said Randy.

To state the effect that Randy's photo's have on the community is remarkable. Randy has 4,999 friends on Facebook, "I've deleted a couple thousand," Randy says with a chuckle. "I've uploaded more than 300,000 photos to Facebook and thats only a portion."

When Randy sets out to an event with his camera he is thinking "600 to a 1,000 (pictures) should cover a game." He then goes through them, crops the good ones and post them.

Randy has a plan for each event he attends, "I try to take a photograph of all the contestants for cross country, its usually pretty easy to get them all cause they are spaced out. I can get most kids with basketball. The hardest is volleyball, I just haven't mastered that yet. I love taking pictures of horses and because of the horses, barrel racing." 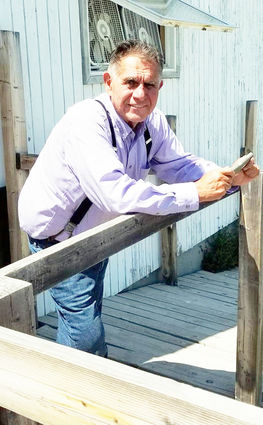 When Randy covers an event, he covers everybody and parents from all over are grateful for it, "I share them with everybody, I don't charge, people can go get the one they like printed out wherever they want to do. If somebody request one I'll send it to them."

His favorite event to cover is basketball, "Powwows are way up there, but you can only take so many pictures of one person. The colors and contrasts are remarkable and they are all different which is fun to look at, but basketball is my favorite because, well, I just like it," Randy stated.

Hays/Lodge Pole Athletic Director and Head Girls Basketball Coach Corey Morgan sums up the way so many people feel, "Randy Perez provides a selfless service to every event on the Hi-line. Everyone from youth to Elders are able to relive History through his photo's."