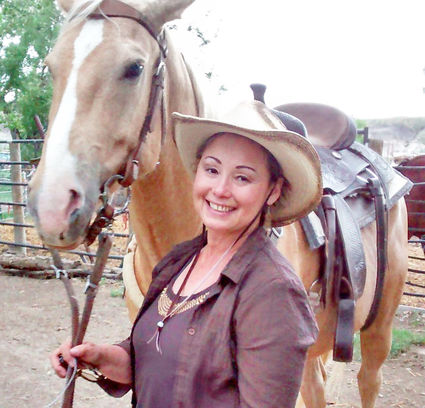 Kitty Martin Wines aka Vickey Broughton, age 62, of Chinook MT, passed away on Dec 10, 2020 after diagnosed with Covid. Kitty was born May 13th 1958 to Ruth Solomon & Gene Broughton in Long Beach CA. In 1969 Ruth moved her four children to Havre MT to raise her family on the ranch that was left to Ruth & her brother Ted after their father passed. Being raised on the ranch south of Havre is where Kitty found her passion & love for horses & the outdoors. While still in High School Kitty even broke two of her own horses with the help of the hired hand Bill Hinkle. In school Kitty was active in Rodeo Club, gymnastics, Karate, and Kitty loved to swing dance & sing and even at the age of 18 she went and got a pilot's license. Kitty being the oldest of all Ruth & Ted's children, Kitty was responsible for watching over and caring for up to 9 younger siblings and cousins all running around on the ranch. After graduating from Havre high school in 1976, Kitty went to college in Billings MT for a few years until she met and married Joe Spinler with whom they had a blended family, Ashlee Broughton, Melissa Spinler, Joel Spinler, Rebecca Spinler & Chalmus Spinler. Kitty & Joe moved to Anchorage Alaska in 1984 so Kitty could be closer to her mother. While living in Anchorage Kitty took sewing lessons from a native furrier and became a master Furrier. Some of Kitty's work was recognized by a movie producer of "Last of the Mohicans" in which they hired Kitty to make the "fur mountain man hats" for the movie. Kitty had a gift and a talent when it came to sewing and working with fur. Kitty and Joe later moved and made their home in Kalispell MT, where they later divorced. Nothing ever slowed Kitty down, even as a single mother and raising children, Kitty acquired her Real Estate License in which she was passionate about. In the year 1999, Kitty met the love of her life Bernie Wines, and they wed growing her family to three more daughters Jennifer, Tiffany & Samantha Wines. Kitty & Bernie made their home in Colorado where Kitty started her real estate career and became her own Broker and started her own Real Estate Business. Later they moved their family back to Montana and eventually settled in Havre so Kitty could help care for her mother after she was diagnosed with cancer. While caring for her mother Kitty put her Real Estate business on hold so she could finish her college degree at Stone Child College. Kitty along with her daughter Melisa and niece Kyndyll, all three earning their College degrees and graduating together was an enormously proud day for Kitty and her family. After losing her mother to cancer, Kitty & Bernie made their home in Chinook MT where Kitty & Bernie both started their own businesses together. Chinook Montana Realty & BW Handyman Services. Kitty enjoyed working along side her husband. Kitty's focus was always centered on her family. Kitty made each member feel important and that their needs came first before her own. Kitty was a caretaker & a giver and she loved when family came around and she would always cook big healthy meals and entertain us with songs. Even in the shop where their business was located, Kitty even had a karaoke system set up and yes, Kitty would somehow get you up singing and dancing before the night was over. Even as busy as Kitty was throughout her life, Kitty always made time for her God. Kitty was an active member of the Jehovah Witness & she loved her congregation and spreading the word. I know personally Kitty was looking forward to retiring so she could have more time on everything she loved and was so passionate about, Her congregation, working on her hobbies, horseback riding, hunting & fishing with her soul mate Bernie and mostly Kitty just wanted to be able to spend more time with her family & grandchildren. Kitty wanted a huge family reunion that she was going to try to get all the siblings and their families all together. Kitty was a wife, mother, stepmother, Grandma, Sister, Aunt, Cousin, Child of God, and she will be extremely missed by us all. Kitty was predeceased in death by her grandparents Harry Solomon & Elsie Martin Solomon, mother-Ruth Solomon McGarvey, stepdaughter-Jennifer Wines, and a granddaughter. Kitty is survived by her husband Bernie Wines, her children Ashlee Broughton & Joel Spinler, daughter Melissa Spinler, Step daughters Samantha & Tiffany Wines, Rebecca & Chalmus Spinler and grandchildren. Siblings: Julia Solomon, Robert Broughton, Troy McGarvey, close cousins/ Kimberly Solomon Stover & Shannon Solomon, Doug and Todd Solomon. Niece's & Nephews: (Kaci, Shane & Kayla Jones), (Arron, Dani, Jessica, Talitha, Joseph, Samuel, David & Matthew Broughton), (Kyndyll, Rainin, Duke, Skyann, Auneka & Nina McGarvey), (Trevor & Tina Edwards).