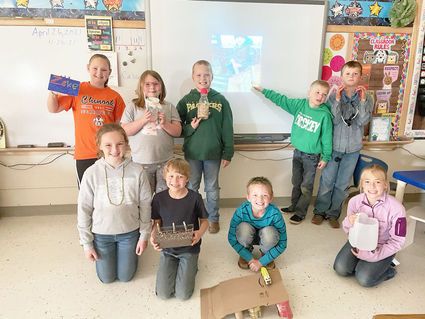 On Fridays, to give teachers additional preparation time as they navigate the challenges of in-person learners and those who work remotely during these pandemic times, students receiving their education in the Chinook School District have a noon release time. In order to mitigate any lost learning time, teachers will typically assign their students projects or tasks requiring independent work.

In the spirit of recycling as well as celebrating Earth Day on April 22, one of the third grade teachers at Meadowlark Elementary School, Mrs. Amanda Davies challenged her students to find a piece of "garbage" and turn it into something repurposed and usable.

According to Davies, this was an open ended project with basically two objectives: "to ignite the possibilities in creativity and to lend awareness to preserving the Earth." Her students surprised her with their creative problem-solving and innovative ideas.

Others moved beyond the expected. For example, Amos Billmayer repurposed a table top into a chalkboard message center for his bedroom, and Cali Van Voast collected used 22 shells to create a necklace and a bracelet after her grandpa helped her drill holes so that she could string them.

Although Tristen Fultz designed a typical cardboard ramp for his toy cars and trucks, the pillars he fabricated from Body Armor beverage bottles and cardboard tubes-such as those around which paper towel or toilet paper are rolled-were cut in staggered heights to create the desired angle for ramp elevation.

A couple of the students, however, might be bound for careers in innovation or engineering. Bentlie Dennis designed a "blue tooth speaker" from plastic Solo cups and cardboard to amplify the volume on a phone, and Kolt Rutledge engineered a shovel to clean his sandbox, which is currently overgrown with grass.

Rutledge was inspired to build a "digger" after he and his cousin went to the scrap metal pile and located nuts, washers, bolts, a discarded duck foot shovel from a cultivator, and a round baler pickup band. To fashion a handle, "we bent the band, drilled holes for bolts, and then we tightened the bolts with wrenches [to attach the shovel]" Rutledge explained to his teacher.

Overall, Davies was impressed with her students' ingenuity and problem-solving ability. "Open ended projects like this give students the freedom to be creative and to use their imaginations," she said. Davies went on to explain that many of the students who don't identify as writers actually wrote in detail to explain how the "garbage" was transformed into something new.