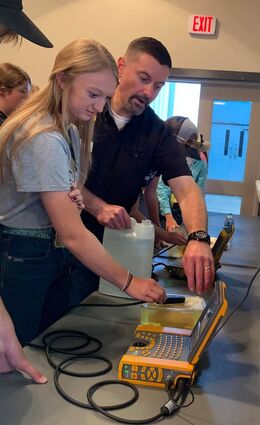 How many young Montanans get to celebrate their thirteenth birthdays at the Grand Ole Opry where the crowd sings 'happy birthday'? Such was the case for Kenneth Gruszie who travelled to Kentucky and Tennessee from July 13-18 to attend the 2021 Junior Red Angus Association Round-Up with his sister, Madilyn, and his mother, Trisha Gordon-Gruszie. While there, Kenneth competed on the Champion Team. The theme for this year's tour was Red Cows, White Lights, and Bluegrass.

Because the Junior Red Angus Association (JRA) is focused on building breed and industry leaders by developing programs that offer members opportunities to strengthen their knowledge of beef cattle and improve their individual breeding programs, the five days were packed with events that highlighted education, competition, and teamwork for the youth. They explored the region's agriculture-with tours to tobacco, industrial hemp, grain, and other diversified farms; expanded their beef knowledge and skills while identifying cuts of meat, performing quality meat tests, and testing feed rations; and engaged with other JRA members in team building activities, recreation, and competitions to broaden their industry knowledge.

On the afternoon of July 13, the Gruszies kicked off their trip with a tour of the Middle Tennessee Research and Education Center. With a focus on reproductive technologies and heifer development, the Center supports research programs aimed at making production more efficient and cost effective.

July 14 enabled the elder Grusize to scratch Kentucky off her map of states visited. "We traveled to River Bend Farms in Cadiz, where Alana Baker Dunn has a ten-year conservation partnership with several agency's, testing the residue in runoff. She also runs 300 head of commercial cows and raises corn, wheat, soybeans, and hay."

In addition to enjoying the bus rides, hotel time, and pool party, Kenneth ranked the research being conducted at River Bend Farms-where they are measuring how much fertilizer, nitrogen, and chemical residue is contained in the runoff-as the most fascinating aspect of his trip.

Their next stop was the Murdock and Sons Farm in Murray, Kentucky, where the group toured a Dark Fire tobacco and industrial hemp operation and watched a drone spray crops. They closed out the day with a visit to Murray State University Hutson School of Agriculture.

"After a long hot day in and out of the sun and heat, we topped off our night with a backyard pool party and taco truck," Gruszie stated.

The first JRA tour on tap for July 15 was another tobacco farm, Servant's Heart Farm. In addition to their production of Dark Fire tobacco, which is used for chew and vape products, and Burleigh-a cigarette and cigar variety-farm owner/operator Joanna Carraway also grows strawberries, corn, wheat, and soybeans.

At this site, Madilyn reported that she enjoyed learning about growing and harvesting tobacco. The sprinkler system in Carraway's barn keeps the temperature under 180 degrees so as to ensure a stable curing process. Carraway explained that tobacco is an extremely sensitive crop with the soil, climate, and curing process all playing crucial roles in the final product. The condition of the leaves is carefully monitored throughout each step since the tobacco could be ruined if additional heat is applied at the wrong stage. Tobacco that is cured this way will generally contain a higher sugar content compared to other curing methods, possess lower levels of nicotine, and impart a mild, slightly sweet flavor and aroma.

Madilyn was also touched by Carraway's story-the tale of a strong and inspirational woman. After her husband lost his fight with cancer, Joanna had to convince her tobacco contractor, who was only accustomed to working with men, to take a chance on her.

"She proved herself to them. This year she was given an apology and told to let them know if she needed anything," Gruszie said.

Friday was another full day, with tours to Owensboro Riverport Authority, Hayden Farms, Chaney's Dairy Farm and Barn, and Red Hill Farms. Hayden Farms is known for its top-tier beef genetics and innovative poultry barns. It has the nation's only poultry barn with a built in viewing classroom.

Since 1942, the James Riley Chaney has been milking Jersey cows. Through the years, the family has made innovative decisions so that they now utilize robotic milking, support agro-tourism, and operate a retail space which is the only place in Kentucky making ice cream that comes from their own milk.

After that full day, the group travelled to Nashville to tour the Grand Ole Opry on Saturday, July 17. Two of the artists the group enjoyed were Vince Gill and Ricky Skaggs. 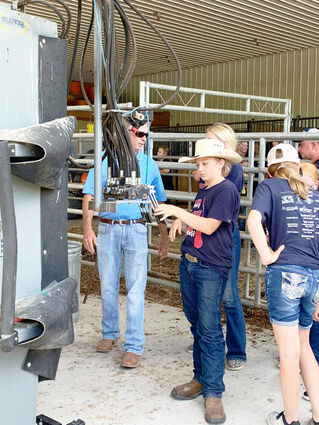 While at Owensboro, Kenneth studies the scale on the chute. Right: At Middle Tennessee Research and Education Center.

While at Round-Up, each participant was assigned to a team that was coached by one of the six JRA board members. Designed to develop team skills as well as to enhance the personal experience of every Round-Up participant through mentoring and peer relationships, these teams competed in various competitions and activities at each tour site over the course of the week, earning points for their team.

At Saturday's banquet, the team with the most points winning the "Champion Team" title was the one on which Kenneth was a member-icing on his birthday cake!

While on tour, the Gruszies met seven other young people from Montana. According to Gruszie, of the 49 young travelers from all over the United States, Montana had the most attendees with nine members.

"We have wanted to go on Round-Up forever, but the fair always conflicted," Gruszie reported. "A bonus for us in having the fair move to August is now we can attend this. By far, these were the most educational seven days I've spent in a very long time," she added.