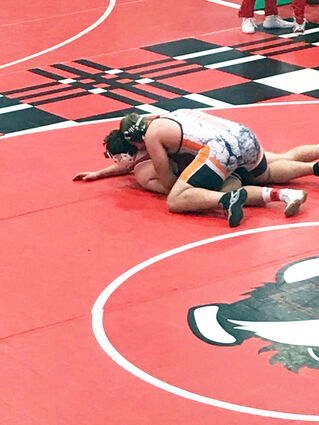 Chinook senior Wyatt Dunbar in complete control of his match Saturday at the Scottie Invitational in Glasgow Saturday afternoon. Dunbar pinned his first four opponents before falling in the Championship match to finish second at 205 pounds.

The Chinook Sugarbeeter Grapplers are now under the leadership of Ben Stroh. The Head Coaches accolades during his time wearing the black and orange are well known. As a four time Montana Class B/C State Wrestling Champion, and a NAIA National Champion for the MSU-Northern Lights, Stroh clearly brings an impressive resume into his first year as Head Coach for the Sugarbeeter wrestling program.

Stroh has a determined approach in leading his team, "I have my experiences I plan to share with the team. The experiences that I hope make me a good coach were partially formed during my time wrestling for Chinook. Also, I bring experiences from many other places such as summer and winter camps, Team Montana, University of Wyoming, and MSU-Northern. I have been very fortunate to have had some great people helping me every step of the way. My coaching style will reflect a little bit from all of these great coaches."

Stroh is familiar with the kids he has in the room having been around the program the past couple of seasons, "We go one day at a time. We, coaches, watch and work on techniques each wrestler needs, individually as well as a team. We also adjust our coaching as needed."

Another Chinook Alum, Kenny Pruttis will serve as an Assistant Coach for the 'Beeters this winter. Robin Stroh will once again assist with the program and Ben is very excited about the staff, "The three of us coaches work well together and have the same goals for the team in mind. Having Dad (Coach Robin Stroh) there as a long time volunteer with all of his years of wrestling experience has made the transition of a new coaching staff easier on the team."

The kids have been working hard to start the season and the time on the mat before the break is especially important, "As a Coach, preseason is never long enough. There is so much that I would like to cover, but there is just not enough time. We will learn as we go and shape the technique to what the individuals need as we move through the season," stated Stroh.

This years team is good mix and Stroh has confidence in the Room, "We are a fairly balanced team. Our younger wrestlers really need to watch and learn from the upperclassmen. This set of Juniors and Seniors have bought into our program and are doing things right each and every day. They are great role models for our underclassmen."

Stroh has high hopes for this years team, "Those more experienced wrestlers are going to be the ones that I anticipate big things from every time we compete. With that being said, I also expect the younger wrestlers to learn fast so they can be on the podium themselves as we progress through the season. I have no doubt that each and every wrestler will do great things this year.

The 'Beeter wrestlers have been performing very well on the mat to start the season. This past weekend at the Scottie Invitational Wrestling Tournament in Glasgow the 'Beeters performed very well. Senior Wyatt Dunbar pinned his first four opponents on his way to a second place finish at 205. Junior Tyler Schoen collected a third place finish at 182 pounds and sophomore Ryley Hofeldt finished fifth at 138/145 in the Girls Tournament 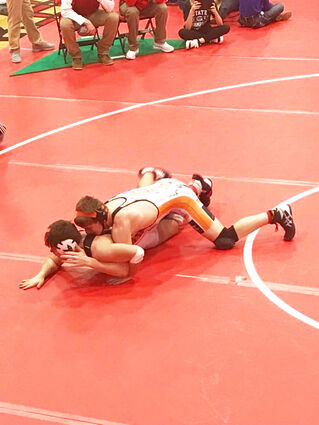