Poking around Eastern Washington: Baseball technology, The Bull on the Bench and Dry Falls 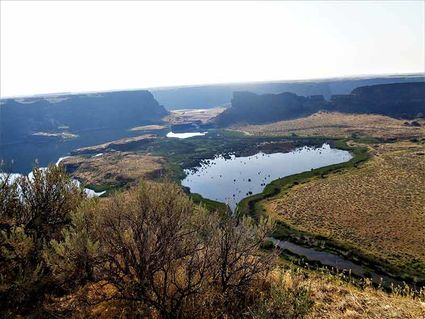 Dry Falls, in central Washington state, is an Ice Age waterfall that is three plus miles wide and 400 feet high. Geologists believe when Glacial Lake Missoula's ice dam broke that the water cascading over these falls was 300 feet above the top or the waterfalls.

Reporter's note: I've been writing about places my wife and I found interesting in our travels. We've made numerous trips to the Seattle area to visit our daughter and her family. Usually those trips are a mad dash to get there (800 miles and 14 hours straight driving), then a made dash to get back to Chinook.

The last couple of trips we've spent some time exploring eastern Washington-that area of the Evergreen State that runs from east of the Cascade Range to the Idaho border. Unlike the west coast and the Seattle area, the eastern part of Washington is drier, both colder and hotter by seasons, gets more snow, is less populated, votes Republican and is referred to variously as eastern Washington, the Columbia Basin, the Inland Empire or the 'other' Washington.

Eastern Washington is so dissimilar to the coastal areas that as late as 2017 there were bills introduced in the state legislature to create a separate state out of the eastern area. The bills never make it out of legislative committee but the attempts at a new state highlight the diversity within the state. Here's a few interesting places we visited and things we learned in eastern Washington.

Learning about a baseball phone app

and an unusual footbridge across the river in Spokane Valley

Recently we spent two days in Spokane Valley, a suburb of Spokane. Spokane is the most eastern major city in Washington state and has a population of about a half million people. We were there watching our 11 year old grandson play in a baseball tournament. The tournament was held at Plante's Ferry Park and Sports Complex, a very nice recreational facility beside the Spokane River.

We arrived at the ball field after a game was underway and I noticed all the parents kept looking at their smartphones. I found that odd figuring after driving 300 miles to watch a ball game parents would at least be looking at the field. Turns out the parents were watching statistics from their sons' game, in real time, using a phone app called GameChanger. I'm always curious how technology changes how we do things.

I asked how the data got into the app and our daughter pointed across the way to a baseball dad who was inputting strikes, balls, outs, errors, runs, etc. as they occurred on the field. Occasionally the dad would walk over to the home plate umpire to get something clarified, then punch in the numbers. As much as I hate watching people glued to their smartphones, I hate more loosing track of what's happening in a baseball game...not a problem with GameChanger. Technology has invaded the national pastime.

When there was a break in the games I took a walk along the Centennial Trail, a 37-mile path that follows the Spokane River all the way to Lake Coeur d' Alene in neighboring Idaho. About a mile from the ball fields a footbridge on the trail crosses the river. The bridge had sides made of cyclone fence set in steel framing. On the fence were hundreds of locks, like used on a school locker or to secure a trailer. I was trying to understand what I was seeing when a guy about my age (old) walking a dog came by. I asked him about the locks on the fencing.

He explained, "It's a tradition around here when someone moves to the area. They take the locks off whatever they used to move their stuff and put the locks on this fence. It's sort of a marker or memorial to a change in someone's life." Many of the locks had dates written or scratched on the them. The guy added, "The idea goes back to a tradition in Europe where lovers would attach two locks on a bridge to symbolize a relationship." On the internet I found several bridges mentioned. In fact, there was a story about a bridge over the Seine River in Paris that had so many locks on it the city recently had to cut them off to reduce stress on the bridge from the weight of thousands of locks. Classic case of too much of a good thing.

A bull on a bench in Ellensburg

Ellensburg, on I-90, is home to Central Washington University, the Ellensburg Rodeo (rated one of the 10 top rodeos in the country) and host to this year's Xtreme Bulls Tour Championship Finale on September 1. We stopped in Ellensburg not because of the rodeo but because our oldest granddaughter works for the local newspaper there. It was our first time to visit her in her new place.

Walking around downtown we encountered The Ellensburg Bull, a sculpture said to be the most famous piece of art in town. It was sculpted by Richard S. Beyer who grew up in eastern Washington. The piece was installed on its current downtown park bench (see photo) in 1986. Originally titled "The Cowboy," the anatomically correct bull (not all details are shown in the photo) was a source of controversy for several years. Finally the sculptor, now deceased, and his supporters won out and the bull stayed. City promoters now use the bull to tie in to the rodeo and bull competitions associated with Ellensburg. Now it's an icon.

Any reader who has driven along I-90 or US 2 from the Idaho/Washington state line on west has likely has noticed the rough land that covers large sections of the eastern part of the state. I'd wondered if those rough lands, often even too rocky and steep for cattle to graze, were the result of some sort of volcanic event or maybe a very slow process of erosion. We got the explanation when we visited Dry Falls Visitors Center near Coulee City, Washington. Dry Falls is 100 miles due west of Spokane, just south of US 2

The short answer to how these rough areas called channeled scablands were created dates to the end of the most recent Ice Age-about 13,000 years ago. Massive ice formations covering what is now northeast Washington, northern Idaho and northwest Montana began to break up and cause ice dams. Geologists believe that ice dams across the Grand Coulee in central Washington were as much as a half mile high creating Glacial Lake Missoula. The glacial lake backed up the Grand Coulee into northern Idaho as far south as Coeur d' Alene and in Montana, pushed into the Swan Lake and Flathead valleys.

Geologists believe huge ice dams created Glacial Lake Missoula, then the dams failed and flooded several times over the years. One estimate calculated that the water left the lake at 60 miles per hour in a volume equal to ten times the flow of all the rivers in the world. The power of the rushing water scoured the topsoil off the areas later identified as the scablands and created the coulees that are common in the area. Icebergs, trapped in the lakes, often had huge boulders frozen in them. When the dams broke the icebergs floated downstream and, as they melted, deposited some of the house-sized boulders found in farm fields downstream of the ice dams.

Dry Falls itself is a geologic phenomenon. Cutting across Grand Coulee, the falls, now with no water going over it, is 3.5 miles wide and over 400 feet tall (for comparison, Horseshoe Falls at Niagara Falls, is 173 feet tall and 2,200 feet in width). Geologists theorize that the water level was as much as 400 additional feet higher when it came rushing through the breached ice dams and over what is now Dry Falls. The force of the water is believed to have caused earthquakes at the time. 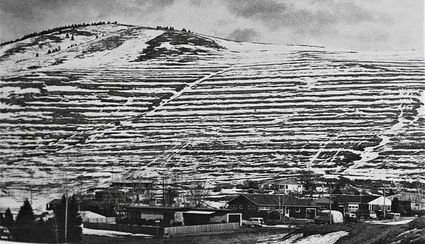 This photo of Mount Sentinel, with part of the city of Missoula in the bottom foreground, shows what University of Montana geology professor David Alt described as "shorelines of Glacial Lake Missoula." The ice age lake created by ice dams in central Washington backed up water as far east as Montana. When the ice dams failed the massive lake surged toward the Pacific Ocean scouring and creating the area in Washington known as the "channeled scablands."

On Mt. Sentinel near Missoula patterns showing different levels of the shorelines of Glacial Lake Missoula can be seen if the light is just right. Again, geologists believe the glacial lake formed, drained then formed again over several thousand years, with each new lake formation creating new shoreline evidence on Mt. Sentinel.

The theory of the glacial lake was first put forward by a geologist named J. Harlen Bretz in the early 1920's. His notion that the scablands were created quickly by the draining glacial lake was scoffed at by geologists. Geologists believed at that time that such changes in the land could only occur over long periods of time. It was not until modern aerial photography and, now, satellite imagery, that widespread evidence of Glacial Lake Missoula and its effects was actually verified.

Driving through eastern Washington can at times seem boring. But under that peaceful veneer is a history of geologic upheavals that changed much of the northwest region of the U.S. It's one of those areas you have to poke around a bit before you really get the whole story.