Chinook will send eight golfers to the State C Tournament in Seeley, May 14-15 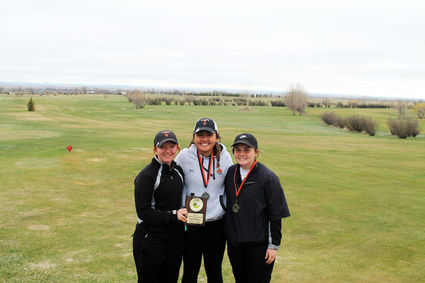 The Chinook Sugarbeeter Varsity Girls Golf Team continued to rack up individual and team titles this past weekend. The girls won the Harlem Invitational on Friday with a team score of 413 in the Class B Tournament. Saturday in Chinook, the girls picked up another team win, leading the field in the Class C Tournament with a 297. Chinook also claimed the top two spots in the individual race as senior Ashley MacLeod posted a personal best 43-44 97 to finish first. Teammate, Sophomore Hailey Bell, was second with a 50-45 95.

The Sugarbeeter golf teams closed out the regular season with a bang this past weekend at invitationals in Harlem and Chinook.

Friday, teams gathered in Harlem for the Wildcat Invitational. The 'Beeter girls won yet another team title, winning the Class tournament with a score of 413 (Top 4 Scores).

Saturday in Chinook the girls kep...