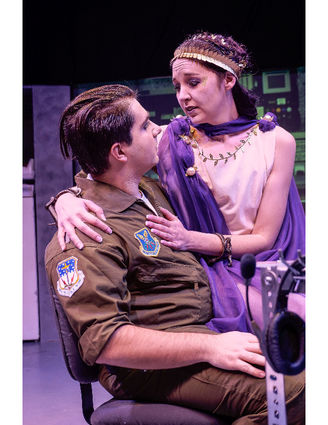 Sitting on Snick Vorbit's lap, MaryBeth Blankenship, playing Andromeda, informs the Lieutenant, played by Clayton Twombly, that the world will end when the clock strikes midnight.

This past weekend, Bear Paw Mountain Outfitters produced the closing of The Vorbit Incident at the Montana Actors' Little Theater on the campus of MSU-Northern in Havre. Former Blaine County resident and 2008 Chinook High School graduate, MaryBeth Blankenship was a member of the cast. She recently shared her challenges and satisfactions in personifying the lone female role of Andromeda, a mythical princess featured in the drama.

The play, with its adult humor and language, as well as some mild violence, is set in a missile silo outside of Great Falls. As the story unfolds, the plot follo...