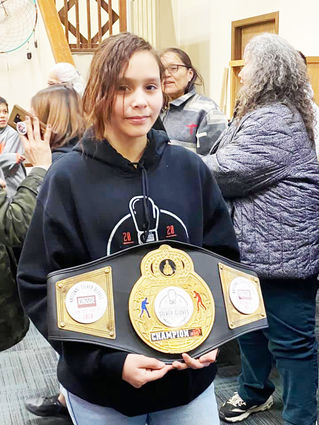 Cochran, who is a member of the Hays Amateur Boxing Club, defeated Emily Ball of Pine Bluff, Arkansas, by technical knockout after the second round of the title bout to capture the 119-pound, eleven to twelve-year-old division belt. Cochran earned a bye into the championship, leading to her title and distinction.

According to Hays Amateur Boxing Club head trainer Jon Jay Mount, Cochran's fight appeared evenly matched from the start, with both girls landing several combinations on one another.

"BreeAnn has unbelievable power in her right hand, and during Round One, her opponent felt some of that. Throughout Round Two, Bree was popping the girl's head and hitting with fast right and left hooks to the body. After that round, her opponent wanted no more and quit on the stool," Mount reported.

The Hays club had two other competitors at the tournament. Diana Old Elk was eliminated in the third round of her first fight in the 100-pound, eleven to twelve-year-old bracket, while Alec Grant, weighing 80 pounds and fighting in the nine to ten-year-old bracket, lost by decision.

Mount said there were more than 600 boxers registered at this year's National Silver Gloves tournament. Because he has a good understanding of his boxers' abilities, Mount predicts they will all continue to develop their talents.

"Both Alec and Diana fought experienced boxers but proved they belong at this level. Alec's main contender was from Rochester, New York, and despite the experience he brought, Alec went toe-to-toe with him. Alec landed combinations and stood up to the Rochester boxer's stubbornness.

Diana also fought with heart, determination, and the will and want to be a champion. Her opponent was from St. Louis and brought a ton of experience, but that didn't concern Diana. She was in the fight, tagging her opponent with clean, solid straight lefts and right hooks, stunning her opponent at times," Mount stated.

Old Elk's tenacity may have been her downfall, however, since her fight was stopped in the third round after she took some shots to the nose that continued to bleed.

"Both of these fighters will be National Champs in the near future, as well." Mount predicted.

In their second season, the Hays Amateur Boxing Club trainers, boxers, and families have worked hard as a team since last September to develop skills, practice conditioning, remain mindful of their health, and reach these goals.

In an Honoring Ceremony on February 10, the FBIC Tribal Council presented both Cochran and LaTray with star quilts. Considered a great honor, the star quilt is often used as a symbolic replacement for the buffalo robe, according to tribal historians. When they are presented, the quilt is wrapped around the shoulders of the recipient as a symbolic way to protect that person on their journey through life. The star quilt is also a reminder that there is honor in giving.

"I am quite proud of that quilt," LaTray said. "When I was invited to Monday's ceremony, I thought I was just going to congratulate Bree. I didn't expect to receive this honor."

Receiving the quilt brought back memories of LaTray's own boxing career, of getting glove burned and going hard rounds without getting knocked out. LaTray, who fought about forty fights from 1969-1975, claims to have always been interested in boxing. "My uncle fought for the Pacific Fleet, and he taught me how to box and how to move. Boxing isn't barbaric like some people think. It's no rougher than playing basketball," LaTray said.

LaTray compared boxing to dancing and moving lightly on the feet. He described jumping rope, running, and performing other forms of conditioning to develop leg strength. "As a boxer, you have to learn to float, to cover-up, and to feint, just as you have to learn the art of when to strike and when not to. As you shuffle around the ring, you have to know how to avoid a punch or take a punch. There's a science to boxing, and if you don't have a good trainer, you can get hurt real bad."

With Cochran, LaTray shared advice about carrying a title: "Things only get tougher from here because when you're carrying a title, everyone wants a piece of that title. They'll throw a lot at you to bring you down. It's a tough row."

During his seven years as a boxer, LaTray trained under Burt Roberts and Cliff Fredrickson, fighting in heavy weight class for Chinook and Havre. He lost only three or four bouts. Yet it isn't of his own achievements in which he takes the most pride. "I'm more proud of those I trained," LaTray said. "Those that have the will to be a champion."