Let's 'Knuckle down' and 'play for keeps'...marbles, that is 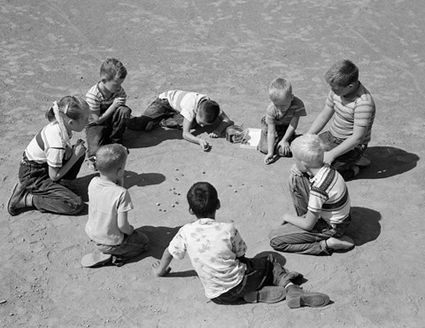 This 1950's era photograph shows boys and girls playing a circle marble game. Each player would take a turn to shoot target marbles out of the circle. Marbles knocked out of the circle were typically claimed by the shooter unless "playing for fair" rules were in effect.

My wife recently came home from a yard sale with a bag of marbles. I had not thought about marbles in years. When I was in grade school (the early 1950's) marbles were a major deal among boys. With dirt school yards it was easy to draw a big circle and start a game of marbles easily. It was mostly "boys only" though a few girls did like to shoot marbles.

For readers not familiar with how to shoot a marble, see attached photo. When a shooter hits another player's marble or knocks a target marble out of a circle or square, the shooter typically takes the marble they hit. There are rules and...