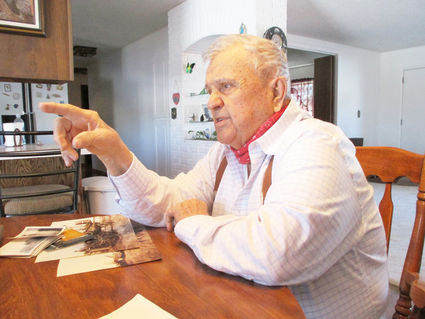 Alert readers may recall a story in the January 27 issue of the "Journal" about Walter J. Brown. Brown, a cowboy for Miller Brothers from the late 1940's through the 1950's, was also a cook on the cook wagon when the Miller crews moved livestock to and from summer pastures. He drew several images of ranch life, using his finger and axle grease, on the canvas cover of a cook wagon. Two of the canvas sections survived, one hangs in the Blaine County Museum in Chinook and the other section will ultimately be in the museum.

In the January 27 story I gave some of the background of how the canvas pieces were made and how the two pieces survived. But there were still a number of questions about the drawings and their history. Recently Doug Mitchell and I went to Malta to visit Doug's cousin Russell Cebulski who worked alongside Walter Brown at Miller Brothers' operation. Russell provided information for the original story about the drawings on canvas. Here's some new information I learned.

Were there additional pieces of art done by Walter Brown on wagon canvas?

The canvas in the museum was donated by the Max Miller family. Max, was given the piece by his uncle, a son of one of the two original Miller Brothers. That piece has been in the museum's collection for a while.

The second piece was given to Leah Miller, Max's widow, by Mike Tilleman who took the piece of canvas as part of a payment on a new pickup. The customer, Jim Smock, bought an old trunk from his boss at a rummage sale in Great Falls. Smock admitted he didn't know about the canvas until he opened the trunk sometime after purchasing it. Delbert Herron sold the trunk to Smock and told he got it from a "native sheepherder south of Chinook." Herron died in 2008 and the story of how he got the canvas will likely never be known.

During the visit with Russell Cebulski he displayed a number of photos of scenes related to the Miller Brothers' operation. A few small black and white photos, prints about four by two and three quarter inches, were of the original cook wagon hitched to two teams with Walter Smith driving. Russell explained he took the photos "with a little Kodak camera small enough to carry in my pocket." The film size was 127, popular in the 1950's in small Kodak Brownie cameras. He took pictures of other cowboys, had someone take his picture, took shots of various cow camps and photographed cowboys doing their jobs.

Russell took photos of both sides of the cook wagon and the canvas cover. One side has a sizeable "49er" painted on it. Asked about the significance of that, Russell Cebulski said, "It could have to do with 1949. That's the year many of us started with Miller Brothers, including me and Walter Brown." The other side has a smaller image of the Miller Brothers brand.

I used a program on my laptop to enhance the photos of the images on the canvas. As I enlarged the photo of the canvas with the brand I could dimly see the outline of what looks like a bucking calf or yearling. It's very much in the style of the images on the two known pieces of canvas, but that image doesn't appear on either of the canvas pieces in the museum or in Leah Miller's possession. The piece owned by Leah Miller does have an image of the Miller Brothers' brand but is much larger and along the edge of the canvas, not in the middle as in Russell's photo.

He was not aware if the canvas was ever replaced.

Did Walter J. Brown do other art and did any survive?

Walter Brown's sister-in-law, Susie, recalled, "Walter drew on all the time." Russell Cebulski told about a group of cowboys sitting around telling stories. One cowboy told about Russell being bucked off a horse. Walter was sitting with the group and sketching. Soon Walter held up a drawing. Russell said, "It was a drawing of me getting bucked off. I don't have the drawing."

I knew other cowboy artists who did drawings or paintings on bunkhouse walls, barn doors and places where they spent down time. I was curious about two cow camps mentioned in the first story about Walter. Walter's brother, Joe, said that Walter sometimes would "winter over with the livestock" at Wilson's Desert, a camp south of Cleveland. Another larger and centrally located cow camp was Steven's Camp, in the vicinity of Three Buttes. I wondered if Walter did art on the walls of the buildings at the cow camps.

Russell had photos of several buildings at Steven's Camp in the early 1950's. Asking around I learned all those buildings are gone. At Wilson's Desert the last remaining building was moved to a nearby ranch for use as a chicken house. Doug Mitchell said there was no art visible in the old chicken house that he recalled. If Walter Brown left art on buildings where he spent time, the art is gone along with the buildings. 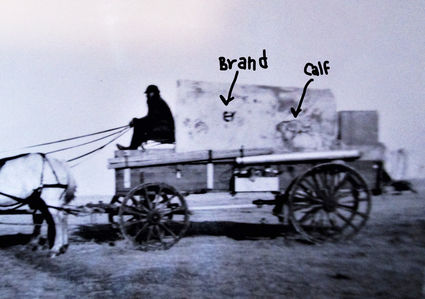 Russell Cebulski did have a drawing done by Walter dated 1988, a few years before Walter died. The drawing (see photo) was called "Fly Time," described by Russell as, "When the horses stand around swishing their tails and stamping their feet to keep the flies away." Russell said, "My wife and I went to visit Walter in Butte where he was working as a miner. He said he would send me the drawing and he did later." Russell and Julia, his wife of nearly 70 years, plan to donate Walter's drawing to the Blaine County Museum.

Unfortunately not all my questions were answered about native cowboy artist Walter J. Brown. At least some of his images on canvas, drawn with his fingers and axle grease, survived and one drawing surfaced. Hopefully readers will be able to see all those images at the local museum in the future.