We played in Peoria! 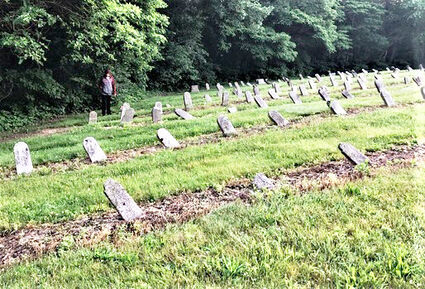 This photo shows a few unmarked graves at the old Peoria State Hospital in Bartonville, Illinois. Lost records and new federal medical privacy rules mean that more than 2500 graves there will never be identified. About 4500 graves are in four plots around the site of the old hospital.

Alert readers may be familiar with the phrase "Will it play in Peoria?" The "will it play" expression dates to the 1920's-30's when vaudeville producers gauged the potential success of a new show by taking it to Peoria, Illinois. If a vaudeville production was received well in Peoria it was believed the touring show would be successful across the nation.

About a month ago my wife, Sherry, and I visited Peoria. We drove to Grand Forks, North Dakota, picked up our son and headed to Peoria (just under 1400 highway miles one way) to be a part of a reunion of Sherry's siblings. Her twin brother and his wife are retired in Bartonville, a suburb of greater Peoria, and hosted the event. It was attended by all five siblings (two from Illinois and one each from Texas, Arizona and Montana) as well as several nieces and nephews from even further far-flung locations. It was a great event and, yes, "we played in Peoria," successfully. Here's a couple of observations from the road trip to Peoria I think "Journal" readers might find interesting.

My wife and I moved about 30 miles northwest of Grand Forks in 2000. Just three years prior the Red River of the North (one of very few American rivers that flow north) devastated the areas in and around East Grand Forks, Minnesota and Grand Forks, North Dakota. The aftermath of the "Great Flood of 1997" was still evident in the physical condition of the area as well as the psyche of the people who had not fled the area permanently.

Out of this disaster came two significant public works programs: the Greenway, a huge public greenspace along the both sides of the river, was created where commercial and residential properties stood before ruination by the flood; and a sophisticated dike system was built to minimize future flooding.

The Greenway, an area larger than New York City's Central Park, provides a large variety of recreational activities including biking and hiking paths, cross country ski trails, picnic areas and a campground within the boundaries of the city of East Grand Forks. A centerpiece of the Greenway is the Flood Obelisk, a visual reminder of how high the flood waters of the Red River reached over the years (see photo and imagine water to the top ring on the obelisk, the height of the "Great Flood of 1997").

Just across a wooded drainage from where my brother-in-law lives is the old campus of the state mental hospital opened in Bartonville in the late 1902 and used until the early 1970's. Described as "a city unto itself" the sprawling facility included nearly 50 major buildings and provided its own services including a dairy farm, large vegetable gardens, living and dining facilities for patients, staff housing and a coal-fired steam plant that produced electricity for the entire facility. At its peak the hospital accommodated 2800 patients.

The state gave the abandoned facility to Bartonville. The town is still working to turn the old site into an industrial park. The industrial park now has a nice mix of repurposed buildings from the old hospital to some new, modern construction. The last major building of the old hospital, a three story 109-room giant with a limestone façade, came down just four years ago.

The main remaining feature is four cemetery plots around the site. Those plots hold 4100+ graves, only 1500 of which are identified with names and dates of death. The rest of the graves are marked with institutionally made concrete stones, each with a unique number. The numbers are tied to written records that were kept of the deaths of the patients. Many patients were wards of the state with no family to claim or identify them.

The state of Illinois declared that no information can be used or uncovered to identify any of the remaining 2500+ graves. Many books recording the deaths burned or were lost through the years. An additional complication, the federal HIPPA Act of 1996, requires strict protection of patients' medical records. HIPPA prohibits the revealing of the names of former patients who are buried in the four plots. Present rules mean the remaining graves will never be identified, a sad end to the folks who died at the hospital

"Yellow-carded" for a face mask violation...on an airplane

Our daughter, who flew to the reunion from Seattle, encountered an interesting situation on her flight east to the reunion. She shared, "...boarding the plane my mask slipped barely below my nose. The male flight attendant issued me a verbal warning about the mask. ...he looked at my seat number and made a note on his iPad."

About an hour in to the flight, while asleep, her mask slipped down below her nose again. The attendant woke her up, handed her a yellow-card and said, "This is your second and final warning." What's the consequence? Reading an accompanying printed sheet she learned, among other outcomes, failure to comply could mean "...you will not be permitted to fly with us while the mask policy is in effect." The document went on to explain the final warning could mean her return or future booked flights would be cancelled. The handout ended with, "We truly appreciate your business...Thank you for doing your part to keep those around you safe." Wow, I thought yellow cards were only used as cautions in soccer games. 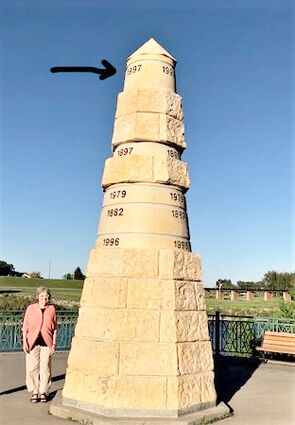 Sherry Edwards stands next to the Flood Obelisk on the banks of the Red River of the North in Grand Forks, North Dakota. The obelisk indicates by rings on the monument where various levels of flood waters were measured over the years. The arrow marks "the Great Flood of 1997" that finally spurred action to build an adequate flood protection system around the towns of Grand Forks and East Grand Forks, Minnesota.

On US Highway 2, in the northwestern part of North Dakota, sits Stanley, a rural community surrounded by large grain fields and some ranches. In the middle of downtown is the Dakota Drug Company, a business started in the early 1900's. The one thing that distinguishes Dakota Drug from any other small town pharmacy is that the soda fountain (I guess that is also a bit unique) has one of only two operating Whirla-Whip machines still in use in the U.S. Invented in the 1930's by an ice cream producing family, it was hoped the machine would launch a new franchise featuring custom soft serve ice cream treats. The franchise never happened.

What makes the Whirla-Whip unique is its ability to turn hard ice cream in to soft serve in a variety of flavor combinations. Teenage soda jerks (they still call themselves that in Stanley) customize each treat by adding up to three ingredients specified by the customer to chocolate, vanilla or sherbet ice cream. Someone once calculated there were a possible 25 billion combinations of flavors that could make up a Whirla-Whip treat. A soda jerk told me, "Most of our customers are tourists or visitors. The Whirla-Whip is no big deal to the locals."

That pretty much summarizes the "highlights of the road trip east." I didn't get to mention the black squirrels in Bartonville (I'd seen gray, red and even albino squirrels before but never black ones), the monument showing the "Geographic Center of the Unites States" in Rugby, ND or the story of the inventor of the aluminum diving board who was a native of Stanley. Maybe topics for future columns.