Turner Gets Past Dodson 52-44, Fall to Bears 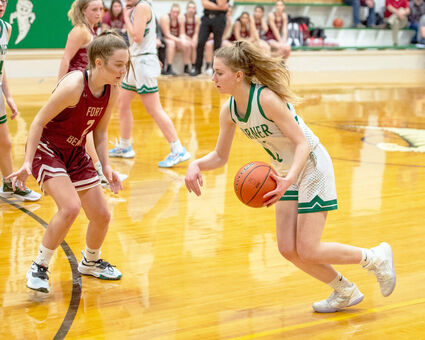 Turner eighth grader Bridget Reed had herself a ball game Friday night in Dodson. Reed had a huge hand in helping the Tornadoes mount a second half comeback in their 52-44 win over the Coyotes. Reed finished the contest with 22 points.

The Turner Tornadoes picked up the fourth win of the season this past Friday night in Dodson. Turner completed the season sweep of the Coyotes with a come from behind 52-44 win.

Turner began the season with three early non-conference wins, but the District schedule has been tough on the young squad. Looking to get a taste of victory back the Tornadoes were in Dodson Friday for the second meeting between the two teams. Turner won the first meeting at home 43-39 back in December.

The Coyotes came out firing early on, doubling up the Tornadoes 16-8 by the end of the first quarter. Freshman Cas...