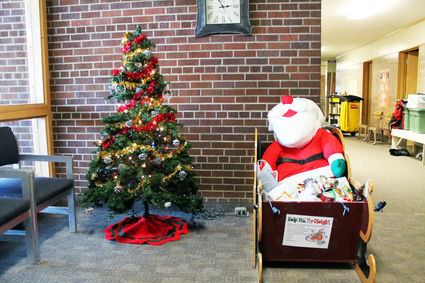 This Santa Sleigh at the Meadowlark Elementary in Chinook is full of food brought to the school by students as part of their 'Food Drive' that will provide meals to student families in need this Holiday Season. Schools all over Blaine County are making significant efforts to ensure everyone has something to eat or clothes on their back and are able to stay warm this winter.

Christmas is nearly upon us and the thought of spending time with family and friends warms us all. Some families find themselves in a position that has them feeling like they won't be able to experience that joy themselves. Students from all over Blaine County are doing their part to ensure everyone has the opportunity to experience some holiday joy.

The Christmas Club at the Meadowlark Elementary encouraged students to bring food to fill up a sleigh located just in the door as you walk into the building. Forms were sent home with the students, grades kindergarten through sixth grade to nominate someone to receive a meal provided by the group or to request one.

No one has ever been turned down for a meal and typically they provide 15-20 meals a year to student families in need. The food will be gathered on December 20 and preparation of the meal will take place that evening. The Christmas group will use money received from North Star Chapter No. 23 to help complete the meals. They will be delivered on December 21.

The Christmas Group also helps with an Angel Tree, which was located at Finley's Food Farm. Tags were selected by community members to donate gifts. The Chinook High School National Honor Society will then wrap the gifts to be ready for families to pick up on December 21.

At Harlem Elementary a contest was held between the three wings of the school to see which could collect the most food. Principal Shilo Seymour stated, “We did this instead of the Cat/Griz food drive we have done in the past, give the wings of the school a chance to compete against each other.”

The three wings, Kindergarten through second grade, Fifth and Sixth and third and fourth, spent about a week and a half collecting food that could generally be prepared by the kids themselves, “We didn’t have a lot of canned food, we were looking for things like mac and cheese, cup-o-noodles or stuff that just needs water added like pancakes. Something kids could make for themselves if they were at home alone,” said Seymour.

A representative of the Harlem Food Bank stopped by the school on Monday, December 10 to collect the food, weigh it and determine the winning wing.

As it turned out the fifth/sixth grade wing collected 152 pounds to win the competition. The K-2 wing gathered 126 pounds while the third/fourth grade wing brought in 112 pounds. In all 390 pounds of food was donated to the Harlem Food Bank by the elementary students.

Chinook High School, the JUMP Youth Group and the Chinook FFA have come together to help provide meals to families in need as well. The school is holding ‘Holiday Spirit Week’ December 10-14 with a format in place very similar to Homecoming week.

Students are encouraged to bring in food items, if they do they can participate in the themes in place for each day: Monday - Pasta and Pajama Day. Tuesday - Canned Vegetable and Ball Cap Day. Wednesday - Canned/Box Soup Ugly Sweater Day. Thursday - Canned Fruit and Santa Holiday Hat, Elf Ears etc. Friday - Condiment and Spice, Black and Orange Day.

“Most of the food that goes out with other groups are be geared to families of school age children and we certainly want to include those, but we also want to make sure that other community members that may be alone, or are down on their luck have the same opportunity,” said Chrissy Downs who is helping with the event.

Collection boxes are set up at the High School office and the school shop.

The Chinook FFA receive a grant $1,000 from Helping Hands and will use that money to complete the meals that will be delivered. Nomination forms to receive a meal are available at the school, on-line at the school website or on the Chinook Junior High and High School facebook page.

“It’s anonymous, anyone can apply. There will be no financial checks or anything like that. If you apply for a meal you will get it,” said Downs. Meals will be put together on December 19 and Downs expects 40-50 students to be involved in the project at one point or another. “We hope to make this an annual event and we look forward to brightening peoples holidays,” Downs concluded.